First-place Scots too much for Panthers 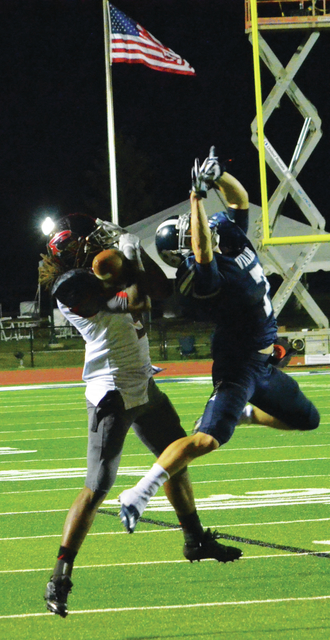 LAGRANGE – They made things interesting.

Trailing Maryville by 17 points in the fourth quarter, the LaGrange College Panthers scored a touchdown to get within 11, and they recovered an onside kick and had a chance to put a further dent into the deficit.

The Panthers were unable to to get the ball in the end zone, though, and it was the visiting Scots coming away with a 30-19 victory on a warm Saturday afternoon at Callaway Stadium.

Despite the loss, LaGrange College head coach Matt Mumme was encouraged by what he saw from his players.

“I was really proud of how hard our guys played. We had some chances early in the game that I talked about with the guys about how we have to jump on those,” Mumme said. “I was disappointed with some calls that took it away from our guys, but we love our players and the hard work they put in every day.”

Jackson, Hardrick and Kiontai Button each had a scoring catch.

For Maryville, it was the Elijah Chenier show.

The running back had a huge day, running for 233 yards on 17 carries with a pair of touchdowns, and he has 465 yards the past two years against LaGrange College.

The Panthers answered with a nine-play, 65-yard scoring drive that was capped by a 36-yard scoring pass from Blair to Button.

Jacob Harper, a sophomore kicker, then delivered a perfect onside kick that bounced high, and the Panthers recovered the ball at the Scots’ 31-yard line.

The Panthers made it to the Scots’ 10-yard line, but an incomplete pass on fourth down ended their comeback hopes.

Chenier put an exclamation mark on his big day with a 74-yard run, and after two kneel-down plays, the clock ran out.

Maryville struck first in the game, going 69 yards in nine plays in the second quarter, and quarterback Nick Myers capped the drive with a 10-yard scoring run.

The Panthers came right back with a six-play, 70-yard scoring drive that ended with Blair tossing a 16-yard touchdown pass to Hardrick.

Harper made the extra point, and it was tied 7-7 with less than two minutes left in the half.

Turns out, that was just enough time for Maryville to score again.

When Gianni Montgomery caught a 21-yard touchdown pass from Myers, there was just nine seconds left in the half, and the Scots took a 14-7 lead to the locker room.

Alex Willard’s 32-yard field goal early in the third quarter gave the Scots a 17-7 lead, but the Panthers responded with a 10-play, 68-yard touchdown drive that was capped by Jackson’s 7-yard touchdown catch from Blair.

The Scots scored the next two touchdowns on runs of two and five yards by Chenier to build the 17-point lead, and despite the late fireworks by the Panthers, the visiting team held on for the win.

LaGrange College visits North Carolina-Wesleyan on Saturday before closing the season with a home game against Methodist on Nov. 12.

LaGrange College quarterback Connor Blair gets a pass away in the second half. Blair threw for 297 yards with three touchdowns. Kevin Eckleberry | Daily News

http://lagrangenews.com/wp-content/uploads/sites/37/2016/10/web1_LC3-3.jpgLaGrange College quarterback Connor Blair gets a pass away in the second half. Blair threw for 297 yards with three touchdowns. Kevin Eckleberry | Daily News

LaGrange College’s Markeis Levatte attempts to come down with an onside kick late in Saturday’s game against Maryville. LaGrange College recovered the kick, but it was unable to turn that into a score at Maryville won to remain in first place in the USA South. Kevin Eckleberry | Daily News

http://lagrangenews.com/wp-content/uploads/sites/37/2016/10/web1_LC1-3-1.jpgLaGrange College’s Markeis Levatte attempts to come down with an onside kick late in Saturday’s game against Maryville. LaGrange College recovered the kick, but it was unable to turn that into a score at Maryville won to remain in first place in the USA South. Kevin Eckleberry | Daily News