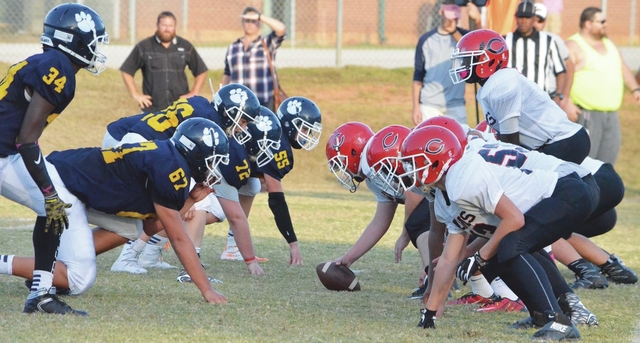 LAGRANGE – The Long Cane Cougars shrugged off a halftime deficit to capture the championship.

On Thursday afternoon, it was Long Cane and Callaway Middle School facing off for the championship of the league they’re involved in.

Both teams reached the title round by winning semifinal games the previous week.

So on a picture-perfect Thursday afternoon at Long Cane’s football field, those two teams squared off with a title on the line.

It was Callaway taking a 12-6 lead at the half, but Long Cane took control in the final two quarters and won 36-26.

“That’s the team we are,” Long Cane head coach Torre Pike said. “All year, I preach we’re a second-half team, a fourth-quarter team. And we just finish. We keep finding ways to win. From July 13th when we started summer workouts, we preached finishing in the fourth.”

It also helped that Long Cane had Jace Godwin on its side.

Godwin is Long Cane’s quarterback, and he had a touchdown run, a scoring pass, he returned a fumble for a touchdown, and he also had an interception in the second half.

Cory Clark added a touchdown for the Cougars, Xavier Clarke was on the receiving end of Godwin’s scoring pass, and Royce White capped the scoring when he picked off a pass near the goal line and scored a touchdown.

While it wasn’t the ending Callaway was hoping for, it was still a special season for a team that opened with three straight losses before turning things around.

“They wanted to stay late after practice. Even on Wednesday they wanted to go full gear,” Callaway coach Kerry Woodard said. “They just kept working, and we started holding onto the ball and rolling. We don’t have a five-star kid on this team, but to me they play like a five-star team.”

Long Cane jumped on top with a touchdown on its first possession, driving 50 yards for the score.

It took Callaway all of one play to pull even.

After a failed onside kick attempt by Long Cane, Dixon took a handoff from Coleman and raced 50 yards for the touchdown, and it was a 6-6 game with 1:41 to play in the opening quarter.

Long Cane’s ensuing possession ended with a lost fumble, and Callaway turned that turnover into a touchdown, and it was Keon Reeves doing the honors with a 4-yard scoring run.

The two-point attempt was stopped, and Callaway led 12-6 early in the second quarter, and that was the score at the half.

Long Cane thought it had scored on a 5-yard touchdown run by Godwin on fourth-and-two, but that play was negated by a penalty.

After a failed fourth-down play, it was Callaway that had a scoring play wiped away by a penalty.

Coleman threw a touchdown pass to Boddie, but the score was disallowed because of a holding penalty, so Callaway’s lead remained 12-6.

Long Cane took the lead, this time for good, with a touchdown to begin the third quarter.

Godwin connected with Hunter Walker for a 19-yard completion, and two plays later, he hit Xavier Clarke for a 5-yard touchdown pass.

Godwin’s keeper on the two-point attempt gave Long Cane a 14-12 lead with 4:41 left in the third quarter.

Moments later, the Cougars padded their lead, and this time they did it on the defensive end.

Godwin scooped up a fumble at midfield, and he raced to the end zone for the touchdown, and following an unsuccesful two-point try, Long Cane led 20-12 with 3:38 to play in the third quarter.

It got worse moments later for Callaway when it fumbled the ensuing kickoff, and it took Long Cane three plays to score again.

After Godwin completed a 15-yard pass to Xavier Clarke, Cory Clark went up the middle for a 21-yard touchdown run, and Godwin found Gage Hernandez for the two-point pass.

After recovering a fumble late in the third quarter, Callaway drove 73 yards for the touchdown, and it was Dixon accounting for most of the yards on the ground.

After two straight first-down runs to put the ball deep in Long Cane territory, Dixon scored on a 5-yard run, and Long Cane’s lead was 28-18 with 4:38 to play.

Callaway then recovered an onside kick, but it found itself deep in its own territory after some penalties.

Royce White picked off a pass just two yards from the end zone, and he easily scored to all but clinch the victory.

Godwin completed the two-point pass to Xavier Clarke, and the lead was 36-18 with 3:44 to play.

Long Cane recovered the ensuing onside kick, and it was able to run out the clock.

OF NOTE: For more photos from the game, check out facebook.com/LDNsports

Long Cane’s Cory Clark makes his way downfield during the first half of the championship game. Kevin Eckleberry | Daily News

http://lagrangenews.com/wp-content/uploads/sites/37/2016/10/web1_cougars7.jpgLong Cane’s Cory Clark makes his way downfield during the first half of the championship game. Kevin Eckleberry | Daily News

Callaway gets ready to run a play during the first half of Thursday’s game. Kevin Eckleberry | Daily News

http://lagrangenews.com/wp-content/uploads/sites/37/2016/10/web1_cougars35.jpgCallaway gets ready to run a play during the first half of Thursday’s game. Kevin Eckleberry | Daily News