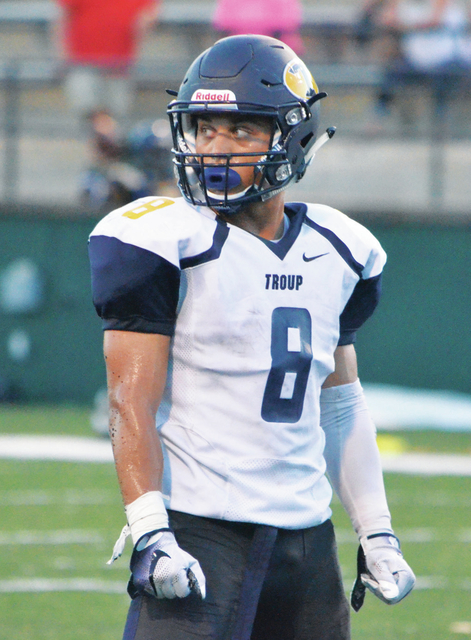 CARROLLTON – They took care of business.

With one of the biggest regular-season games in the history of the program looming, the Troup Tigers went on the road and overwhelmed an over-matched Central-Carroll team 41-0 on Friday night.

Troup (8-1 overall) improved to 5-0 in Region 5-AAAA, and it will play at Cartersville on Friday for the region championship.

It has been three decades since the Tigers won a region title, and they’ll have a chance to do that this week, although it’s an epic challenge.

Cartersville (9-0), which won a state championship last year and has won 29 consecutive games, has dominated every one of its opponents this season.

The Tigers won’t be overwhelmed by the task, though.

Troup has won eight consecutive games, and it already has one big road win this season over an elite team.

It was a 14-14 game at the half, and Troup contolled the action in the second half and led 28-14 before Sandy Creek scored in the closing moments.

“They haven’t really been challenged,” Troup head coach Tanner Glisson said of Cartersville. “They’re the top dog. They’ve won 29 in a row. They’ve got the best quarterback in the country (in Trevor Lawrence). So everything tells us why we can’t do it, but we’re glad to be in that situation, in the underdog role.”

Troup didn’t figure to have a whole lot of trouble against Central-Carroll, and that was the case.

Troup led 20-0 at the half, and it continued to pour it on in the second half, and Glisson was able to empty the bench.

One of the reserve players who was able to get into the game, Alonzo Ogletree, capped the scoring when he returned an interception for a touchdown late in the fourth quarter.

Troup started quickly, going 56 yards in 11 plays for the touchdown, with senior Camren Russell capping that drive with a 1-yard touchdown run.

That’s the way it remained until sophomore Tyree Carlisle, who has seen increased playing time of late due to an injury to Jackson Davis, had a 1-yard scoring run early in the second quarter to cap a 12-play, 63-yard drive, and Carson Wreyford made the extra point to push the lead to 13-0.

With 1:25 to play in the half, Montez Crowe hooked up with tight end Kenly Bridwell for a 23-yard touchdown, and Wreyford’s extra point made it a 20-0 game.

At the start of the second half, freshman Kobe Hudson continue to deliver explosive plays.

Hudson, who leads the team with seven scoring catches, took the opening kickoff of the second half, and he went 85 yards for the touchdown, and Wreyford made the extra point to give Troup a 27-0 lead.

Later in the third quarter, senior Ken Truitt made a diving 25-yard catch in the end zone on a pass thrown by Crowe, and Troup led 34-0.

Ogletree then completed the scoring when he picked off a pass and scampered 35 yards for the touchdown.