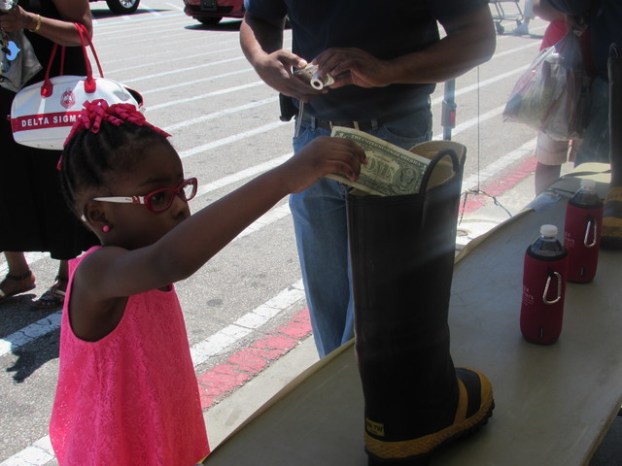 LaGRANGE — The welcome signs of fall have been less than accommodating for the Troup County Fire Department.

Thick, charred patches of grass line the median and sides of Interstate 85, almost like a checkerboard.

“We’ve been lucky the fires have been reported fairly quickly,” Knight said. “We’ve been able to get to the scene and get the flames under control very quickly.”

The summertime drought has filtered into fall, giving us abundant sunshine, but little rain; dry, cooler air, but little moisture in the atmosphere.

“It’s so dry out. Fires spread more quickly than folks are used to when it’s dry,” Knight explained. “The winds play apart in that too, plus the humidity is lower so it is easier for flames to spread.”

The LaGrange Fire Department has halted handing out burn permits to residents within the city limits.

“Right now it is so dry out, it’s like mixing a lighter and gasoline,” said LFD Lt. Chris Taylor. “There’s been no rain here … the wind plays a major factor because it gives the fire oxygen to grow and pushes it (fire) along.

“The wind is also a challenge because it pushes the flames in one direction, so it is almost like firefighters are chasing the fire,” he continued. “When you have variable winds, the fire can change directions at a moments notice and trap firefighters inside the blaze.”

Folks need to receive a permit from the city to burn debris outdoors, such as tree limbs, grass, vegetation and trash.

According to the Georgia Forestry Commission, 54 counties within the state, including Troup County, are under a mandatory burn ban from May 1 – Sept. 30.

Starting in October, people who fall in the county’s jurisdiction must also obtain a burn permit from the Georgia Forestry Commission. As of Tuesday afternoon, the GFC was not issuing permits because of the hazardous fire danger, according to its website.

Sparks from a train along the railroad tracks or someone carelessly tossing a cigarette butt out a car window can also ignite a grass fire in these weather conditions, explained Taylor.

“The weather conditions need to improve. We’re dealing with 80 degree temperatures in November and we haven’t had any substantial rain in a very long time,” Taylor said. “We haven’t been this dry in several years. These are very dangerous conditions.”

Both Taylor and Knight reminded folks to be mindful of properly disposing ashes from grills and outdoor fire pits, make sure material is thoroughly extinguished and do not leave any fires unattended. MANCHESTER — One man is facing multiple counts of cruelty to animals after deputies with the Meriwether County Sheriff’s Office... read more