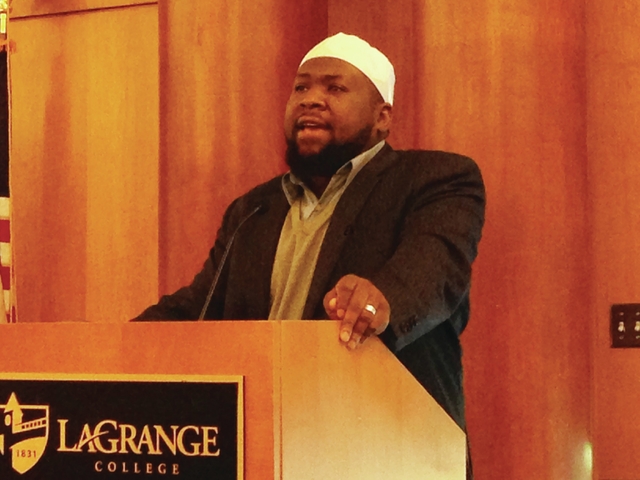 LaGRANGE – College students gathered on Tuesday morning to gain perspective on their faith by hearing a distinctive Muslim speaker talk about Islamic faith in America.

The crowd of students that gathered in the Dickson Assembly Room at LaGrange College appeared to be unsure of what to expect from a recognized leader in Islamic education, Imam Sulaimaan Hamed, when he first addressed them, but by the end of the lecture, students were confident in asking questions about Hamed’s faith and life as a Muslim in America. The students identified almost unanimously as Christian by show of hands, so many of them were curious to learn more about a faith that has received such mixed reviews in the media.

“You should also know about me that I drive a Cadillac,” Hamed said. “I like hot wings. I listen to Reggae music, and I’m a Muslim. … Islam is my faith, but I’m just a regular person.”

The Islamic pastor, or Imam, quickly brushed aside the idea that all Muslims were out to convert the entire world or force everyone to live under Sharia Law. He emphasized the religion’s part as a member of the interfaith community, and his hopes for positive relationships between different faiths.

Practitioners of the Islamic faith do have a few additional requirements to their faith that differ from others, such as praying five times a day, tithing, participation in Ramadan, and a pilgrimage to Mecca, but those requirements do not necessarily impede Muslims from having good relations with people of other faiths, like Christians and Jews.

“It’s an obligation – meaning it’s law, and this law is actually written all the way back to Quran, the book of the Muslims and the Prophet Muhamed – one of the first things of the law is if there are people of other faiths living in there, we are obligated to insure the church, you are able to practice your faith as you see fit,” said Hamed. “So there is no mass conversion. When we hear that on the news, these people aren’t Muslims. We actually disqualify them from our religion.”

In Islamic belief, Muslims are believed to be praying the same God as Jews and Christians, and according to Hamed, it is actually against the Islamic faith not to believe in the scripture of the Jewish Torah and Christian Bible.

“We consider ourselves one of the Abrahamic faiths,” said Hamed. “When we say Abrahamic, we are talking about Abraham – that same prophet that is in the Bible – the father of Isaac and the father of Ishmael, and there was some descendants along the line from Ishmael’s line that came from a person called Mohammed to whom Muslims believe the Quran was revealed, so we think we are brothers – we think we are sisters in faith – that is what Muslims believe.”

Hamed clarified that Muslims are charged by their faith to protect places of worship that belong to other religions and the people who worship there when they are in places where they have the power to do so. This idea stands in direct contrast to what many people have heard about Muslims.

“We are really at unique period in our national history,” said David Ahearn, the Chairman of the Religion and Philosophy Department. “It is always the case that dominant groups don’t know enough about minority groups, and often we don’t know much about Islam. And so, often we are having to simply fill those holes with ignorance. We are at a special period… in which there is not only a lack of information about Islam, but there is active and calculated misinformation about Islam.”

Ahearn referenced several major groups that promote dangerous misconceptions about Islam including the Americans for Peace and Tolerance non-profit that promotes itself as an organization that advocates “peaceful coexistence in an ethnically diverse America,” but has recently made statements regarding textbooks in New England that the Anti-Defamation League ruled lacking evidence and irresponsible.

Ahearn also made a point of listing some of Hamed’s many accomplishments, so that students would know where he was coming from in his speech.

“(Hamed) is the resident Imam at the Masjid of Al-Islam, which is one of the largest and most important mosques in the metro Atlanta area and certainly the oldest,” he said. “…Imam Hamed has specialized training from Grand Mufti Sheik Ahmed Kuftaro of Damascus (Syria) and studied at Abu Nour University. He is fluent in Arabic. He grew up in the Bay area (of California) and prior to coming to Atlanta served masjids in Fresno and in Oakland.”

Masjid is the Arabic word for a mosque. There are about 500 families that make their home at the masjid in Atlanta and about 200 students at the Mohamad school associated to it. Imam Sulaimaan Hamed, a leader from a Muslim community in Atlanta, spoke to students at LaGrange College on Tuesday regarding what it is like to be Muslim in America.

http://lagrangenews.com/wp-content/uploads/sites/37/2016/11/web1_LAG11022016LCmuslim.jpgImam Sulaimaan Hamed, a leader from a Muslim community in Atlanta, spoke to students at LaGrange College on Tuesday regarding what it is like to be Muslim in America.