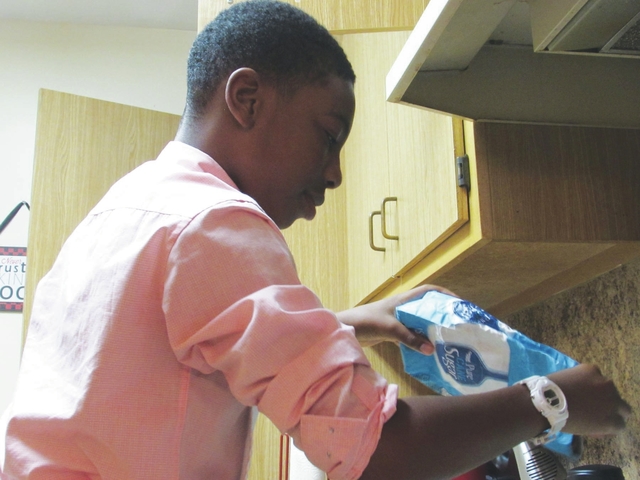 LaGRANGE — Zikei Brooks, 12, is used to being in the spotlight, showcasing his culinary skills and cooking for large crowds.

The 12-year-old Callaway Middle School student won the chance to cook alongside Chef Jeff, as he is known in the community, during several episodes of the local show.

Recently, Zikei stepped into his own spotlight as a contestant on the nationally syndicated show,”Chopped Junior,” which airs every Tuesday at 8 p.m. on the Food Network.

After applying for the show and making it through three rounds of auditions, Zikei and his mom, Aldes Brooks, flew to New York City to tape the episode in April.

“I was pretty confident, but excited and nervous to be around all the cameras,” Zikei said. “It was kind of confusing because you had all these different people telling you different things and you had to take it all in.”

Zikei, plus three other contestants, had a photo shoot and took a tour of the set and the kitchen before taping the show.

Though none of the participants knew what entrees they would be cooking or the ingredients they would use, Zikei prepared for the competition almost every day with his mentor, Chef Jeff.

“He (Jeff) worked with Zikei from the day we found out he would be on the show until the day we left for New York City,” explained Aldes. “Zikei would go over to the Vernon Woods kitchen, where Chef Jeff works … he took my son under his wing and taught him more culinary skills and techniques.

“In New York, Zikei really stood out as a leader … the judges and producers complimented his demeanor and knife skills,” Aldes added.

The four young contestants prepared an appetizer, entree and dessert for the celebrity judges on Chopped Junior. The judges critique every plate and one chef is eliminated after each round.

Zikei’s passion for cooking started when he was 7 years old, said Aldes. Instead of getting involved with sports, the elementary school student learned to create dishes and bake alongside his mom and grandmother.

“He said cooking made him feel good about himself,” Aldes said. “At the time he was being bullied. But instead of getting angry, he put all his passion into cooking.”

“I like it because you can add your own flavors,” Zikei explained. “What I cook tells you about who I am. I like to add bright, colorful ingredients. I don’t like greasy foods. I like food you can savor. I like to combine different recipes. You don’t have to go by just one (recipe) … you can make it your own.”

Zikei even shares his culinary creations with friends and classmates. He made, decorated and delivered cupcakes to fellow student, Alyssa Shirey, hoping to lift her spirits. The young girl is currently battling a brain tumor, Zikei said.

The Callaway Middle School student enjoys sharing his culinary treats with his peers and the self confidence it has given him during a rough time in his life.

“You can come from any type of family, any race, any religion and just be the person you want to be,” stated Zikei. “Be different … know who you are … step outside the box. When you want to do something, go for it.”

The Brooks’ were not permitted to tell the LaGrange Daily News the outcome of Zikei’s episode.

Zikei’s episode of Chopped Junior will air on the Food Network next Tuesday at 8 p.m. Zikei Brooks, 12, pours sugar into a boiling pot of water as he brews a special lemon flavored tea. The Callaway Middle School student will be a contestant on the cooking show ‘Chopped Junior’ on Tuesday.

http://lagrangenews.com/wp-content/uploads/sites/37/2016/11/web1_Chef2.jpgZikei Brooks, 12, pours sugar into a boiling pot of water as he brews a special lemon flavored tea. The Callaway Middle School student will be a contestant on the cooking show ‘Chopped Junior’ on Tuesday.