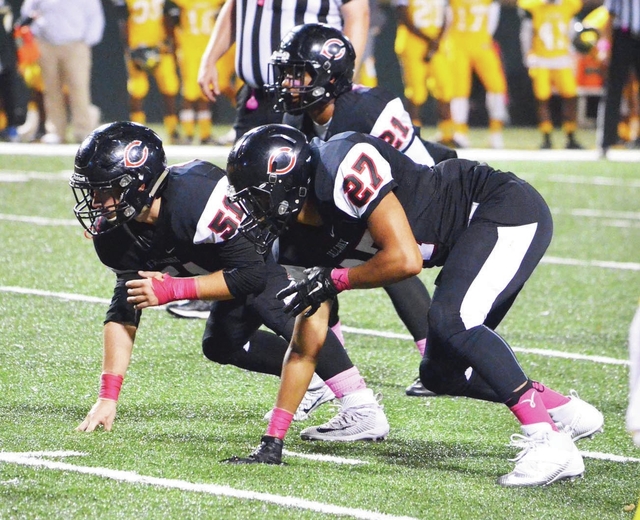 Most of the teams the Callaway Cavaliers have played this season have kept the ball on the ground, but in last week’s game, the Spencer Greenwave didn’t shy away from going to the air with talented quarterback Khalil Thomas lining up behind center.

The Cavaliers were just fine with that.

A strength of Callaway’s team is its secondary, and one of the men who plays in the defensive backfield is Williams.

Williams, along with fellow defensive back Dominic Copeland, had an interception during the Spencer game, and he made a number of other plays as well, breaking up passes and making tackles.

Williams said he and his teammates in the defensive secondary were looking forward to facing a team that threw the ball.

“We prepared all week for that challenge,” Williams said. “Every time they were throwing, we were reading the keys.”

Williams and Copeland both made their interceptions in the first half as Callaway surged to a 29-8 lead.

Williams’ performance was particularly impressive considering he was injured and had to take it easy in practice leading up to the game.

“Courtney Williams played a heck of a game,” Callaway defensive coordinator Dusty Hubbard said. “He was hurt all week, and we didn’t know if he was going to play. He left the game in the third quarterback (against Temple) and didn’t come back. He had a chest bruise, an abdomen bruise or something like that. But to his credit, he practiced all week. He pretty much practiced in a helmet, and that was it. But he didn’t sit out. Courtney was ready to go tonight, and he looked physical making tackles.”

Hubbard felt the secondary would be a strong suit for Callaway considering the experience and talent the team had returning at that position.

Williams, Copeland, Kobe Jackson and DQ Wilkerson were all starters at times last season, and that group has been bolstered by the presence of a pair of freshmen, MJ Robertson and Cartavious Bigsby.

Senior wide receiver Braylon Sanders also gets some playing time on defense, and he made a handful of plays against Spencer.

Those players have helped the Cavaliers win their first nine games, and they won the Region 5-AA championship with the win over Spencer.

“It feels great,” Williams said. “We put a lot of hard work into this. Hard work pays off.”

RECEIVING SKILLS: Junior running back DJ Atkins has found the end zone on numerous occasions this season, but coming into the Spencer game, all of his touchdowns had come on running plays.

The defense converged on Sanders, and nobody noticed as Atkins started racing downfield.

Sanders threw a perfect pass to a wide-open Atkins, and that turned into a 57-yard touchdown.

For Sanders, it was nothing new.

Although Sanders is mostly known for his exploits as a wide receiver, he was the quarterback for the first half of the 2015 season before he went down with an injury.

Sanders has been strictly a wide receiver this season, but he has thrown three scoring passes, one to Atkins, one to Courtney Williams, and one to Johnson.

For Atkins, it was the continuation of what has been a big first season as a starter.

GOING FOR 10: If Callaway beats a winless Jordan team Friday night at Callaway Stadium, it will be a milestone win for the team.

The Cavaliers would not only complete their first perfect regular season, but they would reach 10 wins for the sixth time since 2008.

Callaway set the school record for wins in a season when it finished 12-2 in 2013 and reached the final four, and it went 10-2 a year ago.

Overall, Callaway has won 19 of its past 20 games, and it is on an 18-game winning streak in the regular season.

LOOKING AHEAD: Callaway will be at home for the first round of the state playoffs next week.

Who Callaway’s opponent will be has yet to be determined, though.

Callaway will play the fourth-place team from Region 7-AA, and at the moment, that team is Model, although that could change this week.

Model is in fourth place with a 4-2 region record, but it is only one game out of second place.

One of the two teams in second place, Rockmart, hosts Model on Friday, so those two could end up swapping places.

Pepperell is in first place in Region 7-AA with a 6-0 record, but it faces a big test this week against Chattooga, which is a game back at 5-1.

If Callaway reaches the quarterfinals, it would be at home if it is the higher seeded team.

If it faces another number one seed, those teams would flip a coin to determine homefield advantage.

The semifinals will also be played at a team’s home stadium, and the championship game is in the Georgia Dome. The Callaway Cavaliers will be at home next week against the fourth-place team from Region 7-AA. Kevin Eckleberry | Daily News

http://lagrangenews.com/wp-content/uploads/sites/37/2016/11/web1_CHS19.jpgThe Callaway Cavaliers will be at home next week against the fourth-place team from Region 7-AA. Kevin Eckleberry | Daily News