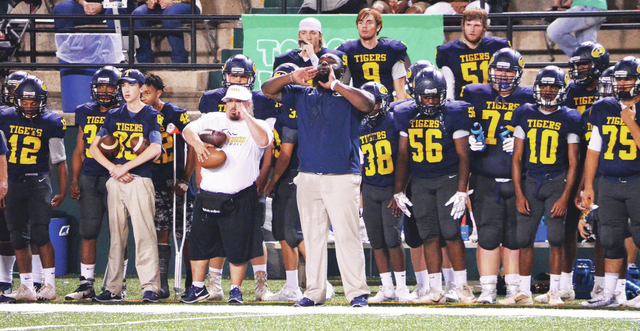 LAGRANGE – On the brink of one of the biggest regular-season games in school history, Troup head coach Tanner Glisson has received a significant honor.

Each week, the Atlanta Falcons recognize someone as their coach of the week.

This week’s honoree is Glisson, who has led the Tigers to a remarkable turnaround season.

With a 41-0 win over Central-Carroll last week, Troup improved to 8-1, and it will play Cartersville on Friday for the Region 5-AAAA championship.

In Glisson’s first season in 2015, Troup struggled to a 1-9 record, and it didn’t win its first game until the season finale against Whitewater.

The 2016 season started on a down note with a 21-14 loss to Hardaway, but Troup hasn’t lost since, and it got a huge 28-20 road win over fourth-ranked Sandy Creek last month.

If Troup can continue its magical season and beat Cartersville, it would win the program’s first region title in nearly 30 years.

“We’re honored and humbled to be named that,” Glisson said at the close of practice on Tuesday. “It’s got my name on it, but it represents all of us. You think about last year, and now you’re winning awards.”

Among the other coaches who have received the award this season are Sandy Creek’s Chip Walker.

“I was looking at some of the names that have received the award this year, and it’s pretty good company,” Glisson said. “So I was pretty excited for our staff.”

For winning the award, Troup will receive a $1,000 grant to be used on equipment, a suite for the Falcons’ game against the 49ers next month, and an article on the program will appear in the Falcons’ magazine.

Hudson, who averages 30 yards per catch, has seven touchdown receptions to lead the team.

Hudson is also a starting defensive back, and he returned an interception for a touchdown in the big win over Sandy Creek last month.

It was a 7-7 game and Sandy Creek was driving for the potential go-ahead score when Hudson picked off a pass, and he raced 75 yards for the touchdown.

Troup went on to beat Sandy Creek, ranked fourth in the state at the time, 28-20.

Then in last week’s 41-0 win over Central-Carroll, Hudson found another way to score when he returned the opening kickoff of the second half 85 yards for the touchdown.

A year go this time, Hudson was wrapping up his eighth-grade season on the Long Cane Middle School football team.

“I knew they were going to get the ball to me, so I just needed to be ready,” Hudson said after practice Tuesday. “I knew I was going to make some big plays.”

FILLING THE VOID: For much of the season, Jackson Davis and Camren Russell have been a formidable one-two combination at running back.

Davis was lost to an injury a few weeks ago, though, and that created an opening at that position.

Sophomore Tyree Carlisle has helped to fill it.

Carlisle’s coming-out party was in a key region game against Cedartown when he had two first-half touchdown runs in a 23-20 victory.

Then in last week’s 41-0 win over Central-Carroll, Carlisle ran for 81 yards on 12 carries with a touchdown.

Russell, who has been a key offensive contributor since he was a sophomore, is Troup’s leading rusher this season with 634 yards and nine touchdowns, and he averages nearly six yards per carry.

Quarterback Montez Crowe has run for 256 yards, and he has four rushing touchdowns.

LOOKING AHEAD: Troup will be at home next week for the opening round of the Class AAAA state playoffs.

As for who the Tigers will play, that remains to be seen.

Troup will either finish first or second in Region 5-AAAA, depending on what happens on Friday night at Cartersville.

Region 5-AAAA is matched up against Region 7-AAAA in the first round of the playoffs, and Troup will either play the third or fourth seed from that region at Callaway Stadium.

Chestatee, which went 1-3 in Region 7-AAAA, is locked in as the number four seed, so it will play the winner of the Cartersville and Troup game.

The other four teams in the region still have a game to play.

West Hall and Marist are tied for second place in the region at 2-1, and Blessed Trinity is in first at 3-0.

In Friday’s regular-season finales, West Hall plays Blessed Trinity, and Marist plays White County, which is in last place at 0-3. The Troup Tigers will host a team from Region 7-AAAA in the first round of the state playoffs next week. Kevin Eckleberry | Daily News

http://lagrangenews.com/wp-content/uploads/sites/37/2016/11/web1_tigers.jpgThe Troup Tigers will host a team from Region 7-AAAA in the first round of the state playoffs next week. Kevin Eckleberry | Daily News