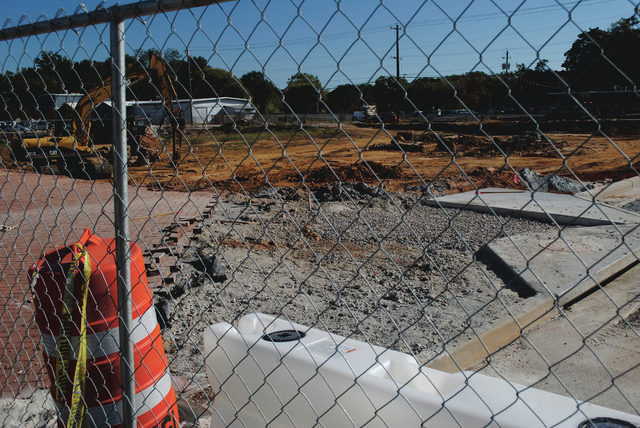 WEST POINT – Construction along U.S. 29 in West Point is expected to be done ahead of schedule.

The city is conducting a pedestrian enhancement project doing street, sidewalk and drainage improvements on city streets. One such project is happening at the corner of Third Avenue and West Ninth Street and City Manager Ed Moon called it a Point University project.

The university is located near the improvements.

Another improvement project is happening between City Hall and Hawkes Children’s Library, across the street from the other work.

Although the street and sidewalk is entirely torn up, a representative of the library said there’s still enough parking nearby.

Moon said there’s parking on the south side of City Hall for city customers and library patrons.

This is the city’s fourth transportation enhancement project. These construction projects have transformed the downtown area with new, elevated sidewalks and other improvements.

The total cost of the projects is $750,000 and it is funded by an 80 percent grant from the Georgia Department of Transportation. The 20 percent of the funds the city is responsible for is coming from its general fund and SPLOST (special-purpose local-option sales tax), which is a financing method for funding capital outlay projects in the state of Georgia.

The construction started in early October and was on a 150-day schedule to be completed. The project is expected to be done in early November, however in less than 60 days. A construction site in downtown West Point between 9th Street and 8th Street is expected to be complete by the end of the month.

http://lagrangenews.com/wp-content/uploads/sites/37/2016/11/web1_City-Hall.jpgA construction site in downtown West Point between 9th Street and 8th Street is expected to be complete by the end of the month. A bulldozer sits at the location of downtown construction in West Point.

http://lagrangenews.com/wp-content/uploads/sites/37/2016/11/web1_construction-2.jpgA bulldozer sits at the location of downtown construction in West Point.