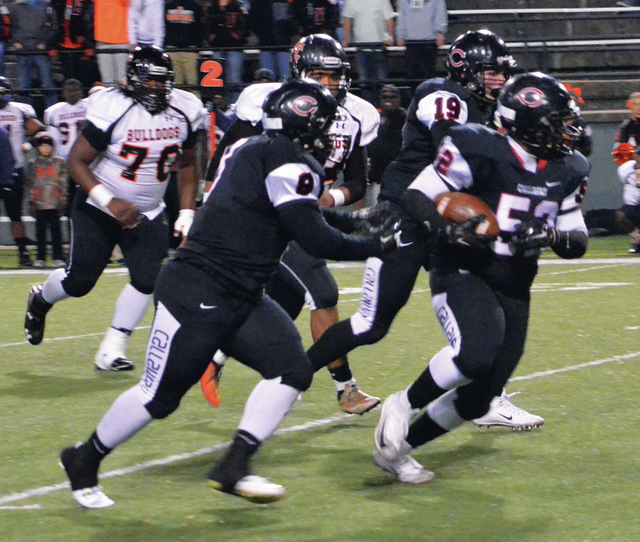 Wiggins now has 100 victories as a head football coach, and each one of them has come at Callaway since he took over the program in 2005.

After the Spencer game, with his family there to enjoy the moment with him, Wiggins was recognized during a brief ceremony on the field.

Wiggins, in his typical manner, didn’t want to talk about himself, choosing instead to deflect the credit to the coaches he’s worked with, both current and present, as well as everyone else associated with the Callaway football family.

“There’s a lot of great people involved in our program,” an emotional Wiggins said on the field following the Spencer game. “They are people that care about our school, and care about our kids. I’m very fortunate as a head coach to have those people.”

There’s no denying the impact Wiggins has made on the Callaway program, though.

Under previous head coaches Sonny Cummings and Claude Giddens, Callaway enjoyed varying degrees of success since the school opened its doors in the fall of 1996.

With Wiggins at the helm, though, Callaway has become a consistent winner.

Since 2007, Callaway hasn’t won fewer than seven games in a season, and it has reached the state playoffs 11 consecutive years.

Since 2008, Callaway has won at least one playoff game every year but one, and it has also captured six region championships during that nine-year stretch.

Callaway’s best season came in 2013 when it went 12-2 and made it to the state semifinals.

Overall, Wiggins has a record of 100-39, and if Callaway beats Jordan on Friday, it will have won at least 10 games in six of the past nine years.

Dusty Hubbard, who has been Callaway’s defensive coordinator since 2005, said a key to Wiggins’ success is his ability to keep people on staff.

Matt Napier, Callaway’s offensive coordinator, has also been in place since 2005.

Other holdovers from that 2005 staff are Kareem Douhne, Terry Hayes, and Tray Tucker.

Also from the 2005 staff, Eric Woods is Callaway’s assistant athletics director, and Ashley Summerlin is the head softball coach and assistant baseball coach.

“The main reason he’s able to keep people, and he’s able to keep guys around, is he’s a great guy to work for, and he lets his coaches work, he trusts his coaches and believes in his coaches,” Hubbard said. “He holds the players accountable, but everything he does is with their best interest in heart. I think the coaches know that. The players know that. And when you have to make tough decisions, people can deal with that if they know that’s the case.”

Following Friday’s game, Wiggins was effusive in his praise of Hubbard and Napier, as well as all of the other coaches he’s worked with.

“There’s a lot of great people involved with that,” Wiggins said. “I just want to say thank you to all of our coaches.”

As for Hubbard and Napier, his right-hand men for more than a decade, Wiggins has a great appreciation for both of them.

“He does a phenomenal job,” Wiggins said of Hubbard. “He has a passion for the job, and our school. Matt Napier, day in and day out, does a great job calling our plays. They’re two good men.”

Hubbard, who has enjoyed an enormously successful tenure as Callaway’s head baseball coach, said Wiggins came in from the start and wanted to create a program that didn’t take any shortcuts.

“It’s the strength training, the offseason conditioning, the passing leagues,” Hubbard said. “We’ve gotten so much stronger and faster since he’s been here, and it’s a real credit to him, and his plan. He’s had that plan, and he’s stuck to it, and he’s been successful. The kids get in a routine, and they learn what to expect, and we believe that kids thrive off discipline, and they have that.”

The players were happy to be a part of last week’s milestone victory.

Senior linebacker Travis Traylor, who has been a part of 38 of those wins over the past four years, said it was “very satisfying” to be on the field for Wiggins’ 100th victory.

“He’ll remember this day for the rest of his life, and we’ll always be a part of it,” Traylor said.

Junior defensive lineman Lichon Terrell said it’s “special being a part of that, especially with the season we’re having, being 9-0 and getting 100 wins in a big game like this.”

Wiggins began his coaching career at Highland Home in Alabama before heading to Murray County in north Georgia, and he then joined Giddens’ staff at Callaway.

When Giddens stepped down following the 2004 season, Wiggins was given the opportunity to be a head coach, and the program has thrived under his direction.

“It’s fun to work for the guy, and I know it’s fun to play for him, too,” Hubbard said. “I don’t know if I wouldn’t have stayed in football as long as I have if it wasn’t for coach Wiggins.”