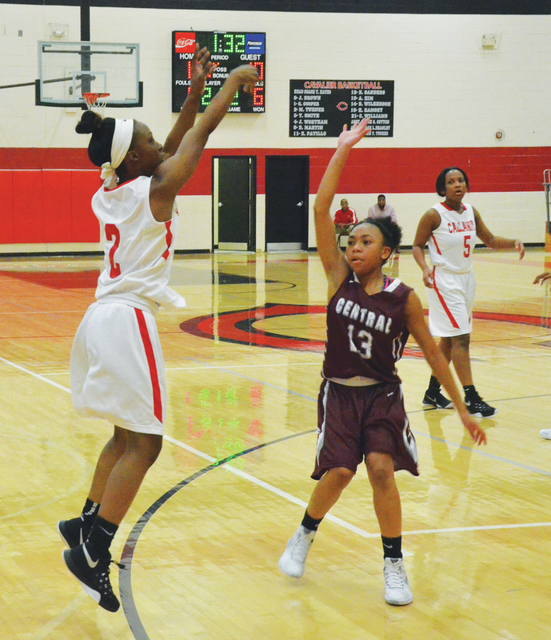 The Callaway Cavaliers put the finishing touches on an unblemished regular season with a 42-12 victory over the Jordan Red Jackets on Friday night at Callaway Stadium.

It’s the first 10-0 regular season in school history, and the Cavaliers will now turn their attention to the state playoffs, and they’ll be at home on Friday for a first-round game.

While Callaway obviously has plenty it still wants to accomplish, the players and coaches took some time to enjoy the moment following Friday’s game.

Perfect regular seasons don’t come along every year, after all.

“To win 10 games is so special,” Callaway head coach Pete Wiggins said. “It says a lot about their character. It says a lot about the commitment to one another, to our team. It talks about their work ethic. I’m proud for this group, and nine seniors who have done a great job leading this football team through adversities that we’ve faced throughout the season, and we’ve faced a lot of good opponents week in and week out. We’ve had injuries. To overcome those things, and to win 10 ballgames, it’s very special.”

This is new ground for the Cavaliers, though, and senior quarterback Dylan Johnson is glad to be a part of it.

“It means a lot to all nine seniors,” Johnson said. “We’ve been together since seventh grade. It’s taken a lot of work to get here. It’s never been done, so it means a lot to us.”

Friday’s game didn’t figure to have a whole of suspense, and that was the case.

While Callaway came in with a perfect record, Jordan was winless.

Callaway surged to a 42-0 halftime lead, and Wiggins began substituting freely late in the second quarter, and it was all reserves in the second half as Jordan managed to score a pair of touchdowns.

Johnson had a touchdown run, and he also threw scoring passes to Braylon Sanders and DQ Wilkerson.

Senior fullback Jibrell Jackson and Tely Fanning each had scoring runs, and Kobe Jackson had a defensive touchdown after picking off a pass and taking it the distance.

Noah Stephens made five extra points, and Hunter Williamson made one.

It took the Cavaliers less than three minutes to put the first points on the board.

On a third-down-play, Sanders got behind the defense, and Johnson delivered a strike for a 51-yard touchdown pass, and it was a 7-0 game with 9:28 to play in the first quarter.

Moments later, Callaway linebacker Qua Hines picked off a pass, and that led to more points.

DJ Atkins had a 14-yard run on first down, and Johnson followed with a 7-yard scoring run, and with 8:09 left in the opening quarter Callaway led 14-0.

On Callaway’s third possession, Jordan’s defense made a stop, but Johnson delivered a perfect punt that was downed at the 1-yard line.

Jordan attempted a pass, and Jackson came up with the pick, and he raced untouched to the end zone, and it was 21-0 with 2:52 left in the first quarter.

Following a Jordan punt, Callaway’s offense went back to work, and Jackson’s number was called.

Jackson, an outstanding fullback, is used mostly as a blocker, but he has been effective when called upon to run.

Jackson took the handoff from Johnson, and he went up the middle for a 19-yard touchdown run, and the lead was 28-0 with 1:08 left in the first quarter.

After another Jordan punt, Callaway took over at its own 44-yard line, and Johnson dropped a perfect over-the-shoulder pass into the hands of Courtney Williams for a 40-yard completion.

Five plays later, it was Johnson hooking up with Wilkerson in the end zone for an 11-yard touchdown, and Callaway led 35-0 with 10:52 left in the half.

Callaway’s next score was set up by a long punt return by Sanders to the Jordan 20-yard line.

After a 12-yard run by Atkins and a 7-yard run by Kedrick Ramsey, who was in at quarterback, Fanning muscled his way into the end zone from one yard out.

Williamson was called upon to try the extra point, and he nailed it, giving Callaway a 42-0 lead.

Dominic Copeland picked off a pass to give the ball back to the Cavaliers, but they ended up punting, so they took the 42-0 lead into the break.

With a running clock, the second half went quickly, and Jordan scored single touchdowns in the third and fourth quarters. Callaway’s defense makes a gang tackle on Jordan’s Emmanuel Mann during the first half of Friday’s 42-12 win. The victory wrapped up a 10-0 regular season for Callaway. Kevin Eckleberry | Daily News

http://lagrangenews.com/wp-content/uploads/sites/37/2016/11/web1_CHS5.jpgCallaway’s defense makes a gang tackle on Jordan’s Emmanuel Mann during the first half of Friday’s 42-12 win. The victory wrapped up a 10-0 regular season for Callaway. Kevin Eckleberry | Daily News