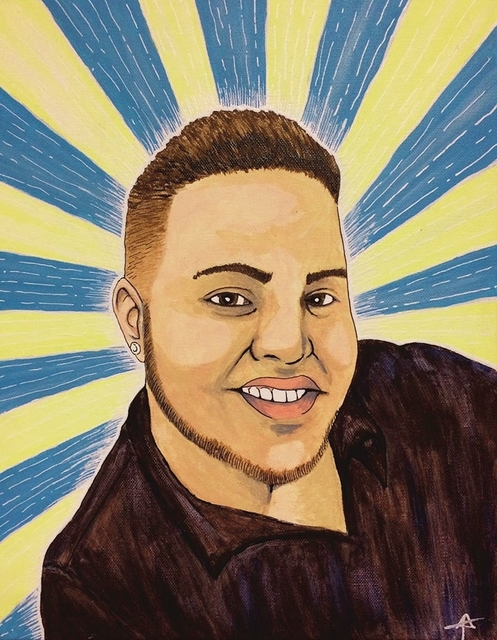 LaGRANGE – The Daily News’ weekly Neighbors series features one person from LaGrange and the surrounding area.

This week we sought a little artistic inspiration from Justine Alldredge, a local artist whose painting commemorating one of the victims of the attack in Orlando in June is set to be featured as part of the 49 Portraits project in the Terrace Gallery in Orlando’s City Hall. Alldredge is a Callaway High School graduate who works at GPS Studios in LaGrange.

LaGrange Daily News: So, tell me a little bit about your work.

Alldredge: The piece that I did was of Jean C. Nives Rodriguez. … I was assigned the person by Mia Merlin who is a professor out of Armstrong University. Really, my thought process going into the painting was I wanted to present the person in this almost like a heavenly (being) because I had gone back and forth about what I wanted it to look like, and I tried to do an iconic kind of portrait – like the halo thing with the rays. I really just wanted to try to do my best to commemorate his life because when I researched him, there was a lot about (how) he was such a great guy, and apparently right before the whole incident, he had just bought a house for his mother. It was so just terrible how it was this person who was just so nice and seemed to be the kind of person who would do anything for anybody, and they’re gone.

LDN: The portrait contained a lot of bright colors. Was that inspired by him?

LDN: That’s awesome. How did you get started in your art?

Alldredge: I don’t know. It is just one of those things where it was just a like that was always there, like you don’t really know where it started out from because I always liked art. I never could really see myself not doing art. … I just graduated in 2015 from the art department at (the University of West Georgia), and that is where I actually found out about the project through one of my professors.

LDN: Where do you like to go that inspires you?

Alldredge: Normally, I go to Pine Mountain. … But I do love (Franklin D. Roosevelt) State Park.

The 49 Portraits project is currently being framed and prepared for shipping in Savannah, and the project organizer Mia Merlin is asking for anyone who feels strongly to donate to the project to help cover costs of framing and shipping at https://www.gofundme.com/49portraits. Justine Alldredge is a local artist.

http://lagrangenews.com/wp-content/uploads/sites/37/2016/11/web1_neighbor.jpgJustine Alldredge is a local artist. Alldredge’s painting of Jean C. Nives Rodriguez is set to be displayed in Orlando’s City Hall as part of the 49 Portraits project.

http://lagrangenews.com/wp-content/uploads/sites/37/2016/11/web1_neighbor2.jpgAlldredge’s painting of Jean C. Nives Rodriguez is set to be displayed in Orlando’s City Hall as part of the 49 Portraits project.