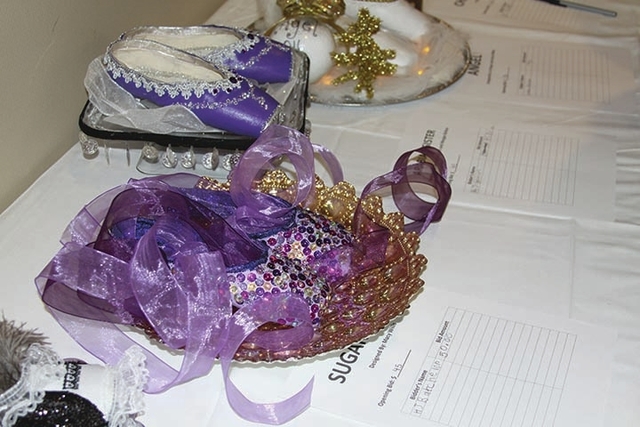 LaGRANGE – Guests were transported to the world of Clara’s dreams at the LaFayette Society for Performing Arts’ Nutcracker Tea Party at Highland Country Club on Sunday.

Opening night is still weeks away, but the excitement was already palpable as the dancers stood confidently in their costumes at the tea. The ballroom of the country club was decorated with props from the ballet’s set and tiny nutcrackers for the tea, and costumed dancers mingled with guests who munched on gingerbread men and sipped peppermint tea.

“It’s such a family tradition for people in the area to go and see The Nutcracker together, and we constantly hear that this is one of the area’s best productions of The Nutcracker ballet,” said Director of Marketing Amy McDow. “We are very proud of the work that Amy Orr does with the ballet company, and it’s fun to watch the girls get so excited each year over the new casting.”

The Nutcracker has been performed by the group for years, and this year is set to be one of the most colorful years yet thanks to the remarkable dancers and a special guest performance by one of LaGrange’s best known storytellers.

“This year in the first act – we are very excited – we have had grandparents before in the party scene, but this year, we are (going to have) a very eccentric aunt,” said Orr. “Her name is Carol Cain. We are going to call her the Countess de LaFayette… and there will be some interesting storylines along with the countess and Drosselmeyer this year.”

Besides Cain, the cast of this year’s ballet will also feature the highest number of snowflakes of any year with 17 dancers in the role. The LSPA is proud to have two seniors set to star in lead roles this year’s production.

“It’s really exciting for me,” said Carolyn Shirley, who plays the lead Arabian dancer. “I’ve kind of waited my entire life – built up to this – and it’s really rewarding to be viewed by all of these people and have all of the little ones look up to me as the lead, and I know how that feels because I was there in that position, and it just really gets me in my heart.”

Shirley says she has always loved the Arabian dance and is excited about getting to play the genie-like character for the ballet. She and fellow senior dancer, Macey Willis, have both grown up in LSPA’s dance program, and are excited to see the younger dancers advance.

“For me the best part is to see the younger girls that have grown up a couple of years younger than me – that I have gotten so much closer to – to actually come into lead roles, and you’re so proud of them for everything they’ve done,” said Willis, who plays the Sugar Plum Fairy. “It’s been exciting for me to watch the younger company do everything that we get to do now.”

That sentiment is shared by the program directors of all the girls, but especially this year’s leads.

“It is nice to not only see them on stage, but to rehearse with them and see their development, see their maturity come out not only in performing but in how they relate to their peers,” said Orr. “… It is really great to see them become young women.”

The organizers emphasized that they were only able to put on performances like The Nutcracker because of donations from sponsors and ticket sales. That funding recently helped pay for some much needed renovations to the LSPA dance studios.

“In a number of our studios we actually just got sprung flooring added where it allows protection for the girls while they are dancing,” said McDow. “It is a hidden benefit in a lot of ways, but it’s one that we felt was very important for the safety of the dancers and their endurance and their ability to really fine tune their craft.”

The LaFayette Ballet Company’s performance of The Nutcracker is scheduled for Dec. 2 through 4 at Troup High School’s Fine Arts Auditorium. Tickets are $16 to $22 for adults and $10 to $12 for students. Macy Willis dances part of the Dance of the Sugar Plum Fairy for guests at the annual Nutcracker tea at Highland Country Club.

http://lagrangenews.com/wp-content/uploads/sites/37/2016/11/web1_nutcracker1.jpgMacy Willis dances part of the Dance of the Sugar Plum Fairy for guests at the annual Nutcracker tea at Highland Country Club. Makenna Cagele made a Walnut ship craft at the event like the one that Clara is supposed to have sailed away in.

http://lagrangenews.com/wp-content/uploads/sites/37/2016/11/web1_nutcracker2.jpgMakenna Cagele made a Walnut ship craft at the event like the one that Clara is supposed to have sailed away in. The company auctioned off point shoes decorated by the dancers to help raise funds for the ballet’s scholarships, workshops and live accompaniment.

http://lagrangenews.com/wp-content/uploads/sites/37/2016/11/web1_nutcracker3.jpgThe company auctioned off point shoes decorated by the dancers to help raise funds for the ballet’s scholarships, workshops and live accompaniment.

Clothes from Mansour’s ‘stayed with you’