Another milestone for Callaway football 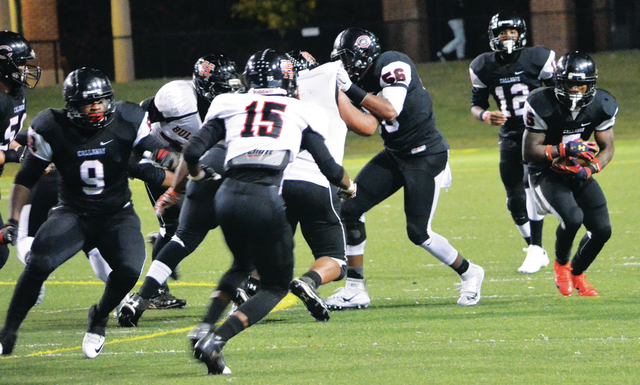 LAGRANGE – They’ve accomplished so much over the past decade or so.

The Cavaliers have reached the state playoffs 11 straight years, and in their eight previous trips to the playoffs, they’ve won at least one game.

The one thing Callaway hadn’t done heading into the 2016 season was finish with a perfect regular-season record, but it now cross that off the to-do list.

With Friday’s 42-12 home win over Jordan on senior night, Callaway improved to 10-0, and it is five victories away from the first state championship in the history of the program.

The Cavaliers will begin their playoff journey on Friday when they host the Model Blue Devils in a first-round game.

Callaway is guaranteed at least two playoff games as long as it keeps winning, and it could possibly be at Callaway Stadium all the way to the state-championship game in the Georgia Dome depending on how the bracket unfolds.

Callaway heads into the playoffs on the heels of a predictably one-sided win over a Jordan team that went 0-10.

It was a 42-0 game at the half, and the second half went quickly with a running clock.

Because the game was decided so early, Wiggins was able to substitute liberally, giving everyone an opportunity to get some on the field under the lights on a Friday night.

“A lot of the younger guys work so hard at practice day in and day out,” Wiggins said. “To see them get on the field, and get on the grass in front of a crowd is special, so I’m proud for that.”

Before Friday’s game, the seniors were honored, and that’s been a special group.

Over the past four years, Callaway has won 39 games and three region championships, and it reached the state semifinals in 2013.

“Over the years, seeing these guys work, and their commitment to our program, it’s been very special,” Wiggins said.

Among those seniors is fullback Jibrell Jackson, who scored one of the Cavaliers’ six touchdowns.

Jackson took a handoff from quarterback Dylan Johnson and scored on a 19-yard run late in the first quarter to make it a 28-0 game.

Before the play, Jackson asked his teammates if they’d join him in the end zone for a celebration if he scored, and they said they would.

So after the touchdown, Jackson and his teammates jumped up and down in celebration of the rare touchdown for teh fullback who is primarily a blocker.

“I was talking about would they come into the end zone and jump with me when I get a touchdown,” Jackson said. “They said yeah.”

Johnson, another one of the seniors, had a 7-yard touchdown run, and he also threw an 11-yard scoring pass to DQ Wilkerson, as well as a 51-yard touchdown pass to senior Braylon Sanders.

Johnson also completed a 40-yard pass to Courtney Williams to set up one of the touchdowns.

The passing game has been a big part of the Cavaliers’ offensive attack this season, and Johnson said he has a lot of faith in all the receivers, as well as the offensive line that protects him.

“It makes my job 1,000 times easier,” Johnson said. “And I’ve got to credit the offensive line. They were great out there. When you’ve got a good O-line, and they do the job they’re doing. And when you have receivers with their athleticism, it really makes my job easy.”

Tely Fanning, a sophomore who has excelled in his role as a backup to starter DJ Atkins, also had a short touchdown run for the Cavaliers.

Callaway also scored a defensive touchdown, with Kobe Jackson picking off a pass in the first half and taking it to the end zone.

Callaway’s kicking game was on target as always.

Noah Stephens made five extra points, and Hunter Williamson also made one.

With the regular season now in the rear-view mirror, Callaway turns its attention to the playoffs.

The Cavaliers have had plenty of playoff success over the years, and they’re hoping to keep their season going for a while.

“The time you put in throughout the year, over the summer at practice, this is what it’s all about,” Wiggins said. “There’s a lot of people involved in that, our coaching staff, our players. I’m excited for our school. It’s a great opportunity for us.” Callaway’s seniors make their way onto the field before the start of last week’s game against Jordan. Callaway completed a 10-0 regular season with the 32-12 win. Kevin Eckleberry | Daily News

http://lagrangenews.com/wp-content/uploads/sites/37/2016/11/web1_CHS7-1.jpgCallaway’s seniors make their way onto the field before the start of last week’s game against Jordan. Callaway completed a 10-0 regular season with the 32-12 win. Kevin Eckleberry | Daily News Callaway’s DQ Wilkerson had a touchdown catch during the win over Jordan. Kevin Eckleberry | Daily News

http://lagrangenews.com/wp-content/uploads/sites/37/2016/11/web1_CHS29.jpgCallaway’s DQ Wilkerson had a touchdown catch during the win over Jordan. Kevin Eckleberry | Daily News Callaway quarterback Dylan Johnson waits for the snap while running back Tely Fanning goes into motion. In the Jordan game, Johnson had two scoring passes and a touchdown run, and Fanning had a scoring run. Kevin Eckleberry | Daily News

http://lagrangenews.com/wp-content/uploads/sites/37/2016/11/web1_CHS41.jpgCallaway quarterback Dylan Johnson waits for the snap while running back Tely Fanning goes into motion. In the Jordan game, Johnson had two scoring passes and a touchdown run, and Fanning had a scoring run. Kevin Eckleberry | Daily News