Cougars back on familiar turf 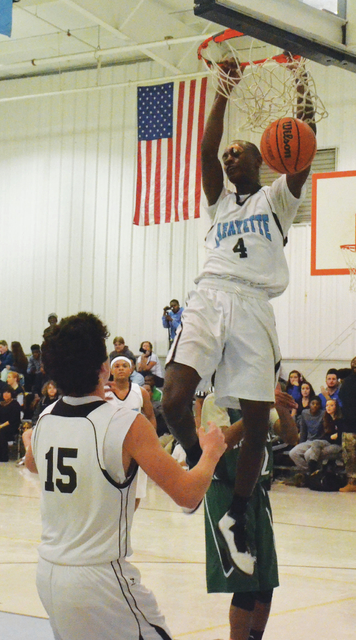 Lafayette Christian was on the road for a first-round matchup last week, and it pulled away late to beat Harvester Christian 36-22.

Lafayette Christian, which won the GICAA state championship last year after losing in the semifinal round in 2014 and 2015, will be back on the road on Friday to play Holy Ground Baptist Academy in the semifinals.

Lafayette Christian had a losing record in the regular season, but it has been playing well of late, and it delivered an impressive performance against a seven-win Harvester team.

“We thought we could be physical with this team, and that it would be to our benefit,” Lafayette Christian head coach Nate Shaw said. “And from the start, we dominated the offensive and defensive line of scrimmage.”

Sophomore quarterback Landon Whitley had a pair of scoring runs for Lafayette Christian, and Jess Hill and Nick Spitler also had touchdown runs.

The Cougars also got a defensive touchdown, with Gary Johnson scooping up a fumble and returning it for a score.

Turnovers were a big story in the game, with Lafayette Christian’s defense routinely taking the ball away from Harvester Christian.

“Defensively, we tackled well,” Shaw said. “We forced five or six turnovers. And they were forced turnovers. We just dug in and ripped that ball away. We jarred the ball loose a lot. Our pads were making contact around the ball, and it was too much for them to hang onto it. We were able to generate turnovers that way, and put ourselves in position to have a short field.”

Shaw said it was a terrific all-around effort by the players.

Harvester struck first with an early touchdown, but Lafayette Christian came right back, with Hill ripping off a 40-yard scoring run.

“Once he got loose in the secondary, nobody was going to catch him,” Shaw said.

It was a 14-14 game at the half, and the Cougars took a 21-14 lead in the third quarter after Johnson scored his second defensive touchdown of the season.

Harvester answered with a touchdown and a two-point conversion, and it took a 22-21 lead to the fourth quarter.

The Cougars controlled the action in the final quarter.

Whitley had a 1-yard touchdown run, and he then completed a two-point conversion pass to Josh Shepherd to give the Cougars a 29-22 lead.

After a Hill interception, Whitley’s touchdown run capped the scoring.

Shaw felt the Cougars’ depth helped them pull away late.

“That makes a big difference, especially when you have guys playing both sides of the ball,” Shaw said.