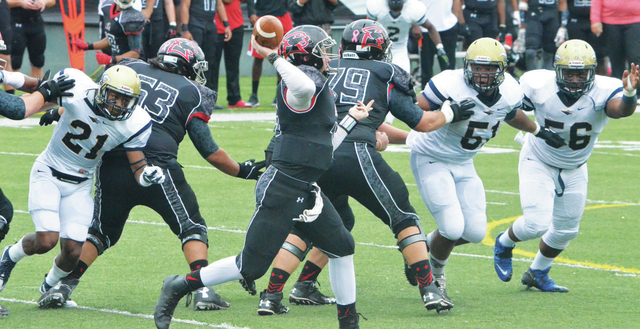 ROCKY MOUNT, N.C. – The LaGrange College Panthers took a lead to the halftime break on Saturday afternoon, but it was home-standing North Carolina Wesleyan pulling away in the final two quarters for a 49-23 victory.

LaGrange College fell to 3-6 overall and 1-5 in the USA South, and it will finish its season with a home game against Methodist on Saturday at 1 p.m.

Blair completed 24-of-43 passes for 295 yards, and he now has 31 touchdown passes this season.

Blair has a chance to set a couple of passing records in the season finale.

Blair needs 312 yards to set the record for yards in a season, and with two touchdown passes, he’ll also own the record in that category.

Graham Craig has both of those records at the moment.

In Saturday’s game, Blair continued to spread the ball around, as he has done throughout the season.

A dozen LaGrange College players caught at least one pass, including Marsalis Jackson and Kiontai Button, who each had touchdowns.

Jackson, Lavelle Meeks and Ervens Oge each had four catches, and Josh Hardrick and Button had three apiece.

The Panthers also scored a touchdown on their first possession, with Graham capping a six-play, 75-yard drive with a 30-yard scoring pass to Jackson.

The Panthers then went 74 yards in 10 plays, and Brad Hodgson capped that drive with a 32-yard field goal to make it a 10-7 game.

LaGrange College’s defense then got into the act, with Rodney Simon returning a fumble 18 yards for the touchdown to make it a 16-7 game early in the second quarter.

The Battling Bishops scored a touchdown to get within two, but the Panthers responded with a 65-yard scoring drive that was capped by a 28-yard touchdown catch from Button.

North Carolina Wesleyan came right back with a touchdown with 1:06 left in the half, and LaGrange College’s lead was two at the break.

The second half was all North Carolina Wesleyan.

The Battling Bishops put it away with a game-clinching stretch at the start of the fourth quarter.

After a 78-yard touchdown pass from Malik Adams to Nathan Gardner pushed the lead to 42-23, Tyreik Dix had a 28-yard interception return for a touchdown just 10 seconds later to cap the scoring.