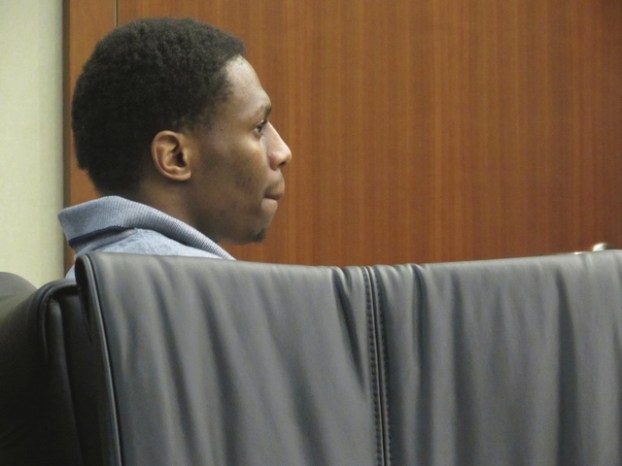 LaGRANGE — Investigators with the LaGrange Police Department have rrested the suspect they believe robbed another man outside the Hot Spot convenience store at 523 South Greenwood Street just after 2 p.m. on Friday.

Jamal Garrett, of LaGrange, was taken into custody over the weekend and charged with armed robbery, aggravated assault, possession of a firearm during the commission of certain crimes and gang related charges, stated LPD Sgt. Robert Kirby.

The victim told officers an unknown man approached him with gun and demanded he hand over his property, a police report said.

The suspect, later identified as Garrett, received an undisclosed amount of cash before fleeing the scene on foot.

Garrett is no stranger to the Hot Spot convenience store.

His brother, Rashaad Quantez Garrett, 22, was convicted of robbing that same business on March 25 in a Troup County Superior Courtroom.

The 22-year-old man pleaded guilty to theft by taking in a separate hearing. Rashaad Garrett and co-defendant, Terry Copeland, were seen on surveillance tape stealing a woman’s purse from the Hot Spot store during a separate incident.

Rashaad was also found guilty of violating the street gang terrorism and prevention act. The 22 year old is a known member of the Bloods criminal street gang, said LaGrange police.

He was given a net sentence of 55 years behind bars from presiding Superior Court Judge Emory Palmer.

The Hot Spot incident was the second armed robbery incident on Friday in less than 12 hours within the city limits.

Two men claimed they were robbed at gunpoint while walking through the parking lot of the Valley Ridge apartment complex at 950 Mooty Bridge Road about 3:30 a.m. on Friday.

One victim told LaGrange Police officers one suspect brandished a small handgun and demanded both men empty their pockets, according to a report.

One victim gave the robbers a cell phone; while the other victim refused to hand over his property, a report stated.

The two suspects then reportedly fled the scene.

During the last 30 days, the city of LaGrange experienced 10 robberies, said Kirby.

The investigator stated of those 10 incidents, eight of them were considered “armed robberies.”

“I should point out that a suspect being ‘armed’ doesn’t always mean they use a ‘gun’, Kirby explained. “Robbers can also be armed with knives or other weapons.”

Only one of the incidents over the past month is being considered gang related, according to the LaGrange Police Department’s gang unit.

Last year, during the same 30 day time frame, there were 13 robberies within the city of LaGrange, he stated. Seven of those incidents were considered armed robberies.

Kirby cautioned people to be vigilant about their surroundings at all times, but especially at night.

LaGrange Police provided a few tips to avoid become a victim of crime:

• Walk in well-lit areas in a group.

• Take a cell phone with you when you walk.

• Be aware of your surroundings. If you think you are being followed, go to a crowded area.

• Do not carry large amounts of money or other valuables.

• Carry keys in your hand.

• If you observe suspicious persons or activities, call 911.

Anyone with information on any incident is asked to contact the LaGrange Police Department at 706-883-2603 or Troup County Crime Stoppers at 706-812-1000. Callers can remain anonymous. Rashaad Quantez Garrett, 22, sits quietly at the defense table while his attorney approaches the judge’s bench. A jury found Garrett guilty on two counts of robbery and violation of the street gang terrorism and prevention act on March 25. Garrett also pleaded guilty to the charge of theft by taking. Troup County Superior Court Judge Emory Palmer sentenced the 22 year old to a total of 55 years in prison for his crimes.

http://lagrangenews.com/wp-content/uploads/sites/37/2016/11/web1_Garrett1-3.jpgRashaad Quantez Garrett, 22, sits quietly at the defense table while his attorney approaches the judge’s bench. A jury found Garrett guilty on two counts of robbery and violation of the street gang terrorism and prevention act on March 25. Garrett also pleaded guilty to the charge of theft by taking. Troup County Superior Court Judge Emory Palmer sentenced the 22 year old to a total of 55 years in prison for his crimes.

LaGRANGE – The Daily News’ weekly Neighbors series features one person from LaGrange and the surrounding area. This week we... read more