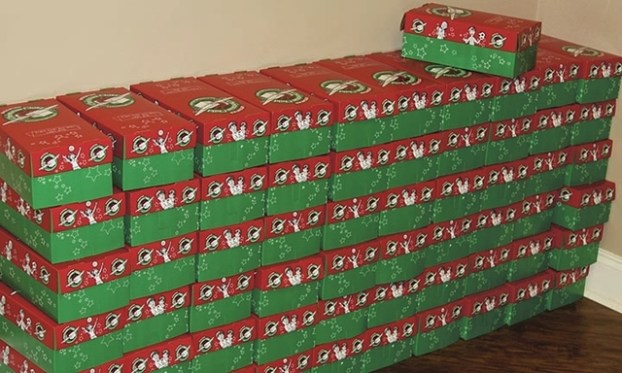 LaGRANGE – It may not be December yet, but the spirit of giving is alive and well at LaFayette Christian School as the school gears up to package and send thousands of gifts to children around the world.

The halls of LaFayette Christian School’s administrative office were lined with shoeboxes ready to be filled on Monday as the school prepared for its annual efforts to bring some Christmas cheer to children around the world with shoeboxes for Operation Christmas Child. LCS is the primary local collection site for the shoeboxes where all of the boxes from LaGrange will be picked up from in a few short weeks, and the administration is excited about local churches’ donations to the program.

“It is an opportunity to share the gospel with a child,” said Wanda Peterson, the business manager at LaFayette Christian School who oversees local shoebox collection efforts. “A lot of times we think of it as a Christmas gift and a box with material things to give and to show love, but it is mainly used just as a tool to tell people about Jesus.”

Operation Christmas Child is a program that is run by Samaritan’s Purse, an international relief organization that takes part in relief efforts both in the U.S. and overseas. The shoeboxes have been sent to places in Central America, South America, Africa, and islands in the Pacific in past years and often go to children who would otherwise go without a Christmas gift or celebration.

“Some of these kids have never ever received a gift in their lives,” said Peterson. “Some of them don’t have anything. They live in war-torn countries. They live in countries that are dealing with famine and drought, and so for them to have an opportunity to just receive a few things, but to alternately hear the message of Jesus Christ (is great).”

Some people – like Peterson – have kept in touch with the children that received their shoebox gifts for years as pen pals by simply sending a note and the supplies needed to reply back. Even if you don’t want to write a note this year, people who donate a processing fee for their shoeboxes online can actually track what country their box goes to using barcode tracking.

Several local churches have printed boxes available for anybody who wants to fill them, but any standard sized shoe box can be used. Boxes can be made for boys or girls in ages 2 to 4, 5 to 9, or 10 to 14, and Samaritan’s Purse recommends filling the boxes with items like small dolls, toy cars, school supplies, accessories, and non-liquid hygiene items. Liquids, candy that melts, and toy weapons are discouraged.

“It is a great program, and we encourage people to do it,” said Rosemont Baptist Church’s Children’s Department Director Philip McClung. “… We are not participating as much this year… but it is a good program.

Rosemont Baptist Church plans to place its primary focus on other mission projects – like their work in Guatamala and Zambia – this year, but the church will still serve as a collection site for anyone who wants to drop of the boxes, so that they can be delivered to LCS and later processed in Atlanta.

LCS turned over a record number of donations at 3,370 shoeboxes to Samaritan’s Purse in 2015, with many of those boxes donated by local churches. This year’s national goal is to collect 9.5 million shoeboxes. Last year the group collected 8.7 million shoeboxes, 1.6 million of those through the Atlanta Regional Office.

“Last year through Operation Christmas Child, we processed 1.6 million shoeboxes,” said Lynda McClanahan, a volunteer at the Atlanta office. “… We are predicting 1.8 million this year. That is our goal.”

First Baptist Church on the Square plans to collect boxes throughout this week, and the church plans to pray over the shoeboxes they have collected at a dedication ceremony on Sunday. The last day to turn in boxes at First Baptist will be on Sunday.

“Our children are probably going to package close to 100 boxes on Wednesday,” said Speri Lowery of First Baptist Church on the Square. “… Our goal is to do more than 1,000 boxes each year.”

The deadline to turn in boxes for Operation Christmas Child at LCS is Nov. 20 at 3 p.m. Shoeboxes can be turned in at the school during the day on weekdays starting on Monday. The shoeboxes are scheduled to go to the processing center in Atlanta early in the morning on Nov. 21. Wanda Peterson hopes that the LaGrange community will be able to collect more shoeboxes then ever before this year for Operation Christmas Child.

http://lagrangenews.com/wp-content/uploads/sites/37/2016/11/web1_christmaschild1.jpgWanda Peterson hopes that the LaGrange community will be able to collect more shoeboxes then ever before this year for Operation Christmas Child. Boxes line the hall at LaFayette Christian School as the school prepares to process thousands of boxes for Operation Christmas Child starting on Monday.

http://lagrangenews.com/wp-content/uploads/sites/37/2016/11/web1_christmaschild2.jpgBoxes line the hall at LaFayette Christian School as the school prepares to process thousands of boxes for Operation Christmas Child starting on Monday.

LaGRANGE – Guests were transported to the world of Clara’s dreams at the LaFayette Society for Performing Arts’ Nutcracker Tea... read more