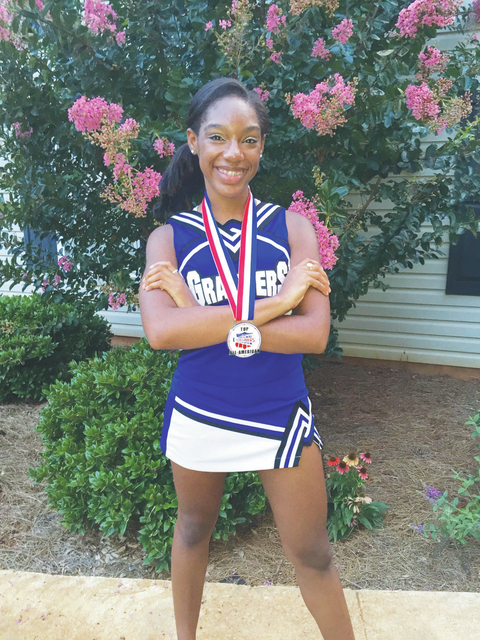 LAGRANGE – They didn’t want an off day.

The Troup High cheerleaders delivered a stellar routine on Saturday during the Region 5-AAAA competition that secured a second-place finish.

The plan was to then take a day off on Sunday, and return to practice on Monday in preparation for Friday’s state sectional in Columbus.

The team members wanted no part of that plan.

They wanted to get together on Sunday to practice, so they asked head coach Amelia Key if that was a possibility.

“This was their suggestion,” Key said. “I said we’ll practice, but it has to be everyone. And it was.”

So on Sunday afternoon, the Troup cheerleaders were in the school’s gym, working on the routine they’re hoping will lead to a state championship.

First up is the state sectional on Friday.

There will be 16 teams competing, and the top eight teams advance to the state finals on Saturday.

On both days, each team will have one 2 1/2-minute routine.

Troup wasn’t far away a year ago.

Troup made it through the state sectional and then finished sixth in the state finals.

Considering the season Troup has had, the possibility of equalling or even surpassing last year’s result is very real.

Including the region competition, Troup has placed third or higher six times this season, and that included one first-place finish.

“I’m really looking forward to this,” said one of the team’s three seniors, Beth Duram. “I’ve waited all year to finally be able to make it to state, and hopefully win. I’m really excited.”

Duram said it’s a tight-knit group, and she believes that helps the team achieve great things on the mat.

“We’ve all grown up together. And we’re all friends,” Duram said. “Everybody gets along, everybody knows how each other works. It’s been really good.”

Duram is one of three seniors on the team, and the others are Emily Young and Carsyn Cone.

Added Cone: “We’ve been doing this since we were probably five or six. We’re all excited and prepared.”

It’s been a stellar season.

In addition to the championship, Troup also had two second-place finishes, and three third-place results.

“They weren’t all first, and I’m glad they’re disappointed in that,” Key said. “But realize there are teams that haven’t won one all year.”

Troup has a challenging routine, one that tests each member of the team.

“We got as difficult as we can get,” Key said. “And then just try to get it as perfect as we can.”

The more difficult the routine, the better the chance of getting a high score that could lead to a championship.

It also increases the odds of a mistake occuring during the routine, though.

At the state level, any mistake, no matter how small, will prove costly.

“You can’t make it up once there’s a mistake,” Young said. “You need to be perfect. Other sports you have a chance to make it up. Here, you don’t.”

If there is a miscue, Young said you can’t dwell on it.

“You just think about it one step at a time,” she said. “If it goes wrong, you have to forget about it and keep going, and try to get everything else better.”

It hasn’t been an easy route to this point.

Practice began in early August, and the cheerleaders have been getting together at least six days a week for practice since then.

Duram said there are no shortcuts to success, and that everyone on the team is willing to invest whatever it takes to be successful.

“You put in a lot of time and effort. You can’t just wake up and do it one day,” she said. “We want to push ourselves. We’re all trying really hard.”

So here they are.

The months of preparation, all of the time they’ve spent practicing on the mat, all of the falls they’ve taken, it’s all been leading to this moment, and they’re ready for it.

“I have confidence in the team in making it to the finals, and even doing better than last year,” Young said.

Better than last year would be a top-five finish in the state, which would be an exceptional result.

Placing in the top five isn’t what the team is trying to accomplish, though.

“We’re really dedicated, and we really want to get that state title,” Duram said. “So, we’ll do anything it takes to get there.”

OF NOTE: For a look at the LaGrange High cheerleading team, see Wednesday’s sports section. Troup’s cheerleading team finished second in the Region 5-AAAA competition to qualify for the state sectional that will be held Friday in Columbus. Contributed photo

http://lagrangenews.com/wp-content/uploads/sites/37/2016/11/web1_cheerleading2.jpgTroup’s cheerleading team finished second in the Region 5-AAAA competition to qualify for the state sectional that will be held Friday in Columbus. Contributed photo