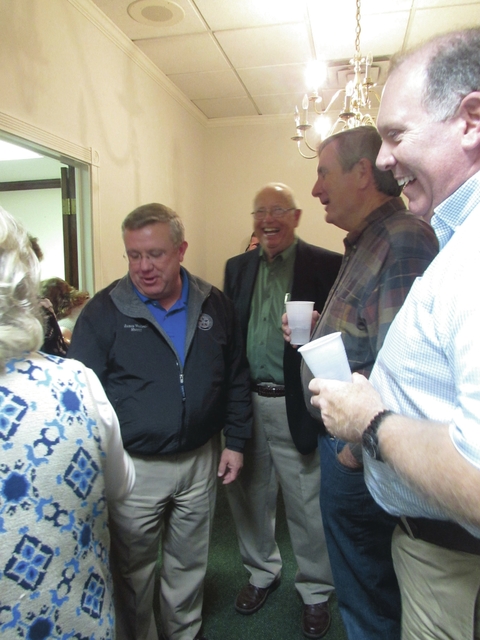 LaGRANGE — Incumbent James Woodruff appeared to walk away with a solid victory Tuesday night and will begin his second term as sheriff in Troup County.

Numbers for all reporting precints were unavailable at press time.

Woodruff was thankful for those who took time to cast their ballot.

“I appreciate the voters that came out and I appreciate their confidence in me and voting me back into office,” he said with a smile. “I also need to give credit to my family and the people who I work with and who stand beside me … we are a team at the Troup County Sheriff’s Office. A team that gets the job done.”

A part of that team was Woodruff’s opponent, Bradley, who took a leave of absence as a deputy with TCSO to campaign for the top job.

Bradley has worked for the Troup County Sheriff’s Office since March 2009. He said he has no regrets about running for the head position.

“It was something I thoroughly enjoyed and I was glad to have the opportunity to go out into the community, talk to old friends and meet some new friends on daily basis,” Bradley stated. “I had less experience in law enforcement and length of time in law enforcement than he (Woodruff) has. But I was working side by side with the other (TCSO) deputies in the field on a daily basis … versus being in an office for several years. So I feel like I had more hands on experience presently versus hands on experience that happened 20 years ago.

“I just want to say thank you to everyone who supported me throughout the campaign,” Bradley continued. “I had the opportunity to follow a life long dream …and to be the sheriff of a great county.”

This was Bradley’s first time running for an elected office. He said he will campaign for the office again in the future.

Woodruff’s future as Sheriff of Troup County will not look much different than his first term, he stated.

“We (TCSO) listen to the public,” he continued. “We’re always receptive to comments and suggestions. We always stay abreast of what is going on locally, statewide and nationally so we can defend against that threat and protect our citizens here.”

Four years ago, it was a very different race for Woodruff. He faced then – Sheriff Donny Turner during the Republican primary, which resulted in a run-off election.

Woodruff beat Turner and during the Nov. 2012 general election, squared off against Ruben Hairston (D) and Clay Bryant, who ran on an Independent ticket.

Woodruff was finally proclaimed the new Sheriff of Troup County in Dec. 2012, after a runoff race between he and Hairston.

It was a victory in 2012 and a win Tuesday night that Woodruff said he will never take for granted.

“Every day I go out and see people in the community,” he stated. “I get to know people and listen to them … I am privileged and honored to serve as Sheriff of Troup County.”