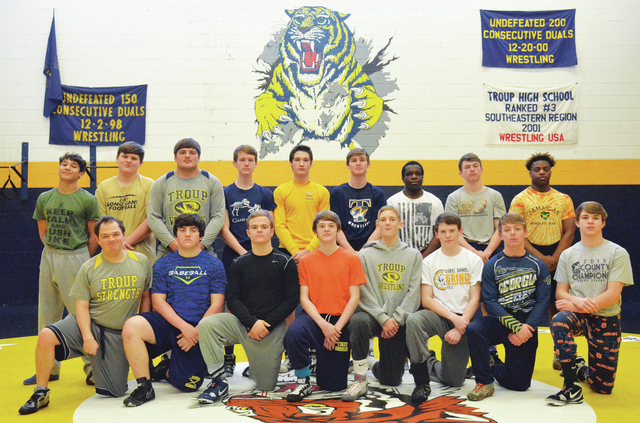 The Troup High wrestling team will jump into a new season on Saturday when it competes in a dual-format tournament at East Coweta.

The Tigers began preseason practice on Oct. 24, and they’ve been going at it hard in the wrestling room since then.

Troup head coach Craig Garner prefers to begin the season with a dual-format tournament because it guarantees each wrestler a certain number of matches.

In a traditional-format tournament, a wrestler could lose two matches and his day is over.

“We’ve kind of gravitated toward the dual tournaments,” Garner said. “A lot of times with a traditional tournament, you’ve got a young guy, he’s very easily going to go two-and-barbeque. He’ll get his two matches, and he’s sitting up in the stands for the next two hours. With this, you’re wrestling. And it’s your team against five other teams. And you can get the max number of matches, and get it done in six, seven hours, instead of being there 12 hours.”

Troup doesn’t have its full complement of wrestlers since many of the team members are still playing football.

“We’ve probably got about 31, 32 guys on the roster right now,” Garner said. “We’re still waiting on about 10 to 12. We’ve got most of those guys to the hydration test this past Saturday. So they come home from Cartersville at one, two in the morning, and then had to be back up here at 8:30 Saturday morning.”

When the full team is assembled, it’ll be a veteran group.

Troup had 13 wrestlers qualify for the state sectional a year ago, and the only senior in that group was heavyweight Hudson Newton.

Among the returnees is Chase Seals, who finished third in the state last year, as well as Trevor Upchurch, who was sixth.

“Other than Hudson, we’ve got everybody back,” Garner said. “I think if we keep progressing and get some of our younger guys to step up, and get our football guys back in the room, we’ve got a chance to be pretty good.”