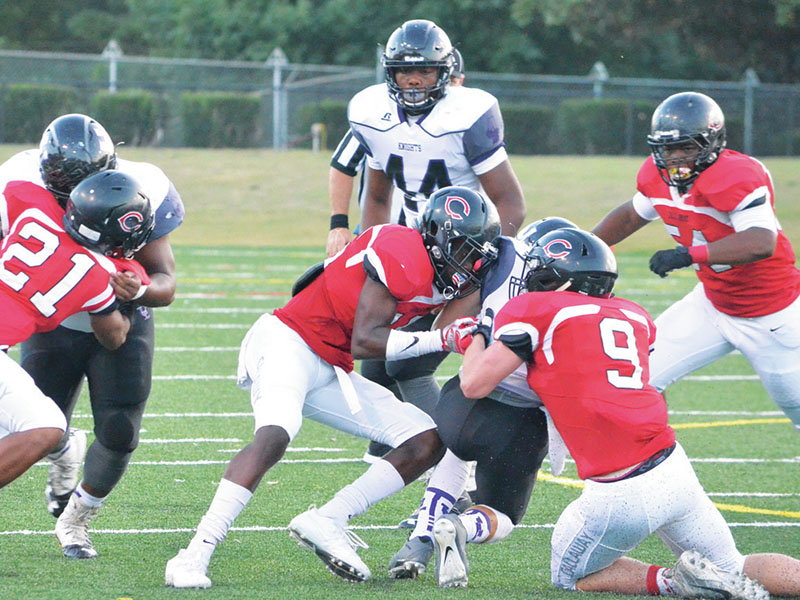 HOGANSVILLE – The Callaway Cavaliers will bring a perfect record into Friday’s playoff showdown with Model, and a lock-down defense is a big reason why.

In 10 regular-season games, the Cavaliers gave up 126 points, an average of less than 13 points per game, and that number is particularly impressive considering the starters have left a lot of the games early because of blowouts.

Callaway has a group of linebackers who have been accumulating big tackle numbers, a defensive line that has dominated things up front, and a ball-hawking group of defensive backs.

Earlier this season, defensive coordinator Dusty Hubbard said a key to the team’s success has been putting opposing offenses in bad situations.

Leonard, who was primarily a special-teams player a year ago, has been one of Callaway’s top defensive players since Day 1.

“He’s a play-maker. He plays with so much heart,” Callaway head coach Pete Wiggins said. “He runs to the ball, and he plays with everything he’s got on every single play.”

Freeman, meanwhile, has been a key player on both sides of the ball.

He’s not only the leading tackler on defense, but he’s a critical player on offense from his tight-end position, and he had two touchdown catches in game earlier this season.

Before the season, Freeman said he was ready to be on the field as much as he needed to be.

Traylor, like Freeman a senior, won the team’s ironman competition before the season, and Hubbard said he’s as fit as anybody on the team.

The defensive line is traditionally a position of strength for Callaway, and this year is no exception.

The leading tackler among that group is Terrell with 48, and the numbers only tell part of the story.

He has consistently wreaked havoc on opposing offenses, and even when he doesn’t make the tackle, he is impacting the play.

In a win over Spencer that wrapped up the region championship, Williams and Copeland both had interceptions, and Jackson returned an interception for a touchdown last week against Jordan.

OF NOTE: For a preview of Callaway’s playoff game against Model, see Friday’s sports section.