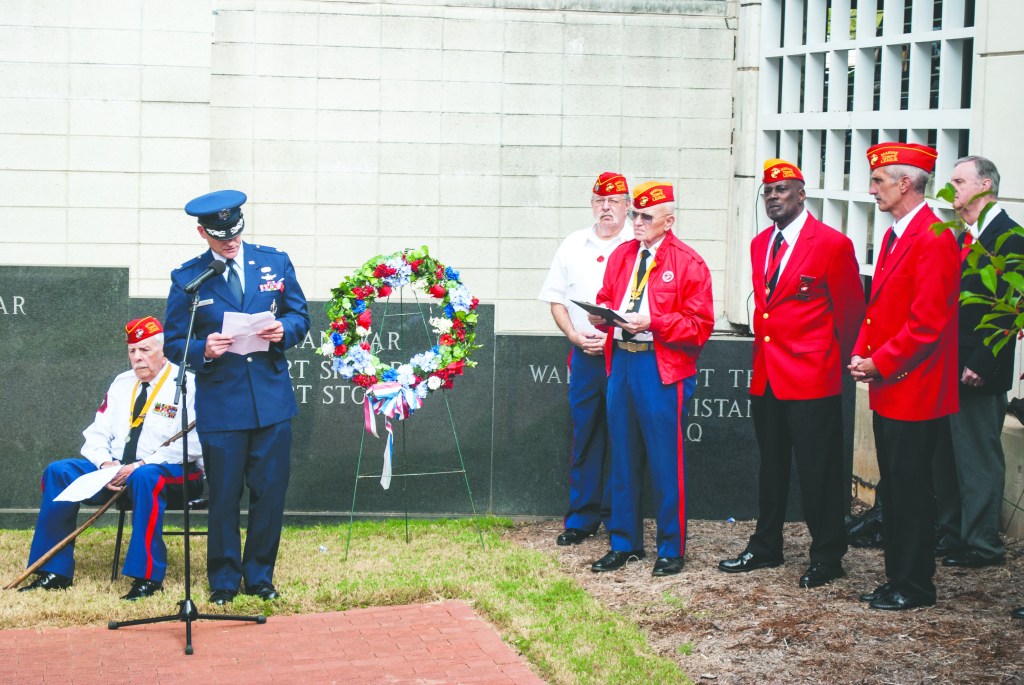 LaGRANGE – Veterans Day comes once a year, so when past and current living veterans are honored on the renowned day, family and friends in attendance try to soak it all in.

Member organizations of the West Georgia Veterans Council held the service, which took place on a concrete of bricks where the names of deceased Troup County veterans or people that have had a relationship to the veterans were inscribed.

The PFC George Eiland Detachment 1040 Marine Corp League began the ceremony with a welcoming, posting of the colors, the pledge of allegiance and singing the National Anthem.

Past Marine Corp League Commander Bernard Bledsoe would go onto recognize a list of veterans that served in World War II, the Korean War, Vietnam, Desert Storm, and the War on Terror who have recently passed away. Bledsoe also introduced the main speaker of the ceremony, Lt. Col. Jerald L. Craig, who is retired from the United States Air Force, a senior aerospace science instructor, and works with the Air Force Junior Reserve Officer Training Corps program at Callaway High School.

Bledsoe, who is one of the central people who puts this event together to honor veterans year after year, was very pleased with the ceremony.

Craig spoke to the crowd about freedom, justice and described what the meaning of being an American means. He discussed how he got involved in JROTC in high school and the influence that the class had on him. Craig ended his speech by encouraging the audience to tell the four fellow JROTC cadets from Callaway High School, who were handing out programs throughout the event, that they are doing a wonderful job representing their country.

There was a laying of a wreath by leaders of local veterans’ groups, then a singing of “God Bless America,” and in recognition by the West Georgia Veterans Council, Past Commandant of PFC George Eiland Detachment 1040 Marine Corp League, Al Yates presented the “Veteran of the Year” award to veteran Charles Waller.

After Waller received his award with family members and friends seated in the front row, a prayer capped off the Veterans Day ceremony.

Bledsoe spoke to the importance of having the event.

“It’s obviously important to us to have this ceremony because I think all veterans appreciate some recognition. If we don’t do this on a regular basis, then people wouldn’t think about the dedication required to serve this country,” he said.