It’s been a special season for LaGrange 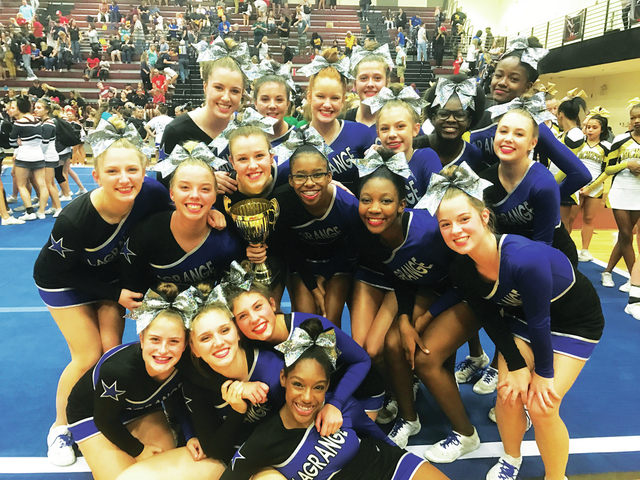 LAGRANGE – Three times this season the LaGrange High cheerleaders have found themselves returning home with a first-place trophy.

LaGrange, after finishing fourth in last weekend’s Region 5-AAAA competition, will be one of 16 teams participating in the state sectional on Friday.

If LaGrange finishes among the top eight teams in the sectional, it will qualify for the 16-team state finals on Saturday.

The sectional and the finals will both be held at the Columbus Civic Center.

“We’ve had an amazing season,” LaGrange coach Stephanie Hall said. “For LaGrange, it’s been the best season. Our last three (before region) were first-place finishes. We ended up fourth in region. We had a little bit of a bobble. But it happens. I think it’s probably made the kids work harder this week.”

It has been a stunningly successful season for LaGrange, highlighted by the three first-place finishes.

“I’m extremely proud of what this team has accomplished,” said Kennedy Burks, one of five seniors on the team. “We continued to work hard, and push through each practice. We were able to put an amazing routine out on the floor. That’s all us and the coaches can ask for is for us to put our best out on the floor. And it’s gotten us pretty far.”

LaGrange did have the one mistake in the region competition, although the team members didn’t realize there was going to be a deduction until they’d completed the routine.

After the deduction, LaGrange fell to fourth place, and it finished one point ahead of the fifth-place team.

Only the top four teams qualified for the sectional, so LaGrange was close to not advancing.

“We were so close to going home,” Burks said. “But we were blessed enough to go through. That’s all we can ask for. We can come back and do our best at practice.”

One of the other seniors, Kaitlyn Kuhn, said “this is by far the team I’ve been on,” and she added that there are no shortcuts.

“You have to be in the gym all the time,” she said. “You have to prepare your body for two minutes and 30 seconds. We all do that.”

As for the chance to chase a state championship, Kuhn said “I’m so excited. We all are.”

Senior Callye Ann Chastain said a key to the team’s success has been getting everyone in the right position on the floor.

Chastain said she loves being a member of this team because of how close they all are.

“It’s awesome,” she said. “These are my sisters. They’re my best friends. It’s so much fun. I wouldn’t trade it for anything.”

Senior Sarah Kate Cadenhead said the team has made tremendous progress since the start of the season.

“We started out really rocky,” she said. “The first time wasn’t what we wanted, so we set our minds to being better than we were yesterday, and we came out on top.”

Cadenhead and her teammates have spent so much time practicing and competing throughout the season, but she said it has been time well-spent because of the kinship she has with her teammates.

“It’s so amazing, and I’m so blessed to be a part of this team,” she said.

Kuhn said any difficulties the team endured has only brought everyone closer.

“All teams go through rough patches, and we’ve been through them,” she said. “I think it brought us together as a team. Now, we’re working as a team. We want it just as bad as everybody else.”

Senior Javiyana Burden said winning the first competition this season was a thrill for everyone.

“We weren’t expecting it at all,” Burden said. “When they gave second place to another team, we were nervous. And then they said first-place LaGrange, and we were so excited.”

Burden said she’s “very proud” of how far the program has come.

Echoing the sentiments of her fellow seniors, Burden said it has been incredibly meaningful to share this experience with her teammates.

“There are a lot of different personalities,” Burden said. “As a whole, we’re all a family. They’re my sisters now.”

Burks said because of the talent level on this team, the routine has grown in difficulty as the season has progressed.

“Usually in cheerleading you don’t really change your routine as often as we have this season,” Burks said. “But, due to our potential and our ability, our coach feels that we can challenge ourselves, and go that extra mile, so we can put our best out on the floor.”

If LaGrange puts it all together this weekend, it could find itself finishing among the top teams in the state.

Burks can’t wait to get on the floor and try to make that a reality.

“I am so ecstatic,” she said. “It’s my last time going (to state). I’m hoping for the best, and praying for each one of the teams, that everybody gets to do their best.”

One of the teams LaGrange will be competing against is Troup, which placed second in the region competition.

Burks said that won’t keep the cheerleaders from LaGrange from cheering for Troup.

“We support Troup as if they were our sisters,” Burks said. “We love them, even though they are our cross-town rivals. We treat them as if they’re family.”

Hall said LaGrange and Troup have been in the same competition on numerous occasions this season.

“Our county has been well-represented, between Troup and LaGrange,” Hall said. “We went back-and-forth with them all season, and it’s been fun. There aren’t many competitions, so we were there every week together. We’ve all grown up together, so it’s been a cool season.” LaGrange High’s cheerleading team will participate in the Class AAAA state sectional on Friday in Columbus. It has been a strong season for LaGrange, which finished first on three occasions. Contributed photo

http://lagrangenews.com/wp-content/uploads/sites/37/2016/11/web1_cheer1.jpgLaGrange High’s cheerleading team will participate in the Class AAAA state sectional on Friday in Columbus. It has been a strong season for LaGrange, which finished first on three occasions. Contributed photo