Troup’s high-scoring offense gets it done 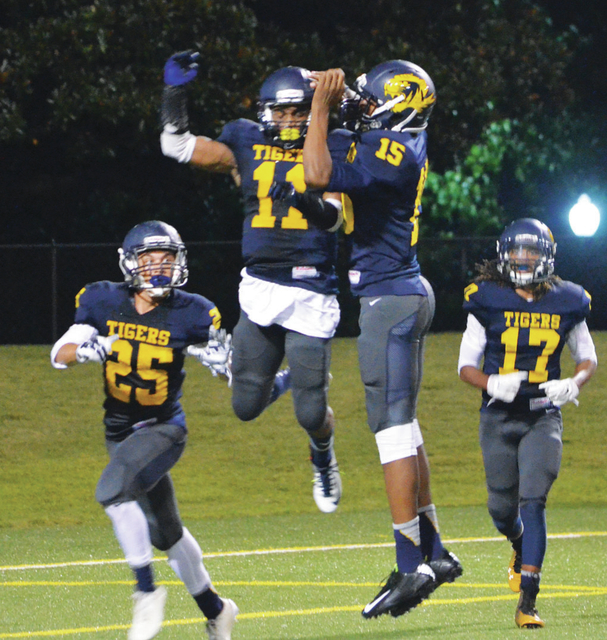 LAGRANGE – He didn’t care for the view from the bench.

In a critical region game against LaGrange, Troup senior running back Camren Russell twice had to leave the field because of an injury.

With fellow running back Jackson Davis unable to go because of an injury, Russell felt it was important to be there for his teammates.

“They view me as a leader,” said Russell, whose team will host West Hall in the first round of the Class AAAA state playoffs today. “Me doing that, I believe it allowed them to step up and make big plays.”

Russell is a key part of a Troup offense that has been getting it done in a big way this season.

Troup, despite getting shut out by Cartersville last week, is averaging 30 points per game, and it produces on the ground, and through the air.

Russell leads the way in the run game, and junior quarterback Montez Crowe has been hurting opposing defenses with his ability to make plays in the passing game.

Russell, who has been one of Troup’s top players since his sophomore season, has 121 carries for 676 yards, an impressive average of 5.6 yards per attempt.

Russell has also found the end zone 10 times, accounting for half of Troup’s rushing touchdowns.

Russell also has seven catches for 126 yards out of the backfield.

“Cam’s our steady rock, and he’s important,” Troup head coach Tanner Glisson said following the LaGrange game. “He’s a hard guy to get down. And his ball security is great, so that was big.”

For the first half of the season, Jackson Davis provided a nice complement to Russell, but he has been unable to go for the past few games because of an injury.

Davis has 45 carries for 231 yards with three touchdowns.

With Davis out of action, Tyree Carlisle has stepped in and run for 151 yards on 30 attempts, and he has scored three touchdowns.

Crowe is also an effective runner, and he has 259 yards on the ground with four touchdowns.

In the passing game, Crowe has been terrific.

Crowe has thrown for 1,585 yards, which is a single-season record at Troup, and he has 16 passing touchdowns.

Even in games where Crowe has struggled, such as the Cedartown game where he had four interceptions, he has found a way to make plays and lead the team to victory.

The trio of Ken Truitt, Kobe Hudson and Chanse Hill has combined for 62 catches and 14 touchdowns.

Hudson has had a remarkable freshman season with 21 catches for a 26.7-yard average, and he leads the team with seven receiving touchdowns.

Truitt also has 21 catches for a 17.5-yard average, and he has four touchdowns.

Hill has 20 catches, and he also has three touchdowns.

Junior MaCenta Stafford had nine catches and a touchdown before he went down with an injury.

Tight end Kenly Bridwell has been an explosive offensive player with six catches for a 19.5-yard average, and he has one touchdown.

Leading the way is an offensive line that has been effective all season.

The offensive line features Brandon Barronton and Ethan Short at the tackle positions, Brandon Turner and Keshawn Cameron at guard, and Seth Adams at center.

“All those guys up there love football,” Glisson said of the offensive linemen. “They love practicing. They love the Troup family, and they are very invested in what we’re doing. When you get those guys that invested, and it’s that important to them, that’s big.” With running back Tyree Carlisle lined up next to him, Troup quarterback Montez Crowe gets ready for the snap during a game against Cedartown. Kevin Eckleberry | Daily News

http://lagrangenews.com/wp-content/uploads/sites/37/2016/11/web1_troup11.jpgWith running back Tyree Carlisle lined up next to him, Troup quarterback Montez Crowe gets ready for the snap during a game against Cedartown. Kevin Eckleberry | Daily News Troup’s offense huddles during a game this season. Troup has been getting it done on the ground, and in the air. Kevin Eckleberry | Daily News

http://lagrangenews.com/wp-content/uploads/sites/37/2016/11/web1_troup12.jpgTroup’s offense huddles during a game this season. Troup has been getting it done on the ground, and in the air. Kevin Eckleberry | Daily News