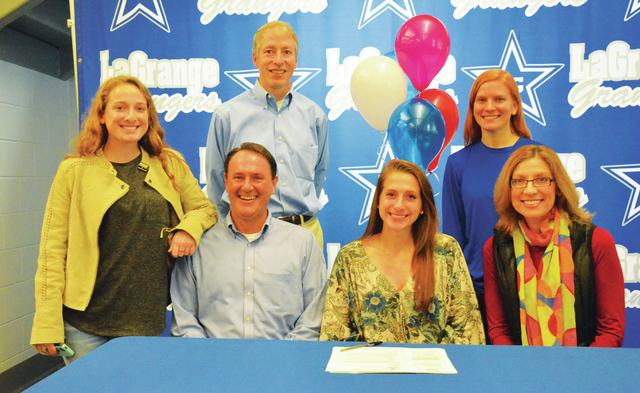 LAGRANGE – She’s ready to up her game.

LaGrange High’s Alaina Tomlinson has been a highly successful high-school runner, and she’s eager to test herself on the next level.

She’ll get that chance.

Last week, Tomlinson signed a letter of intent to become a runner on the cross country and track and field teams at Georgia State University in Atlanta.

“I’ve worked really hard to try to get here,” Tomlinson said. “I’ve always wanted to run in college. I’ve got the opportunity.”

Tomlinson made it official during a signing ceremony last week in the LaGrange High media center, and she was joined by those closest to her, including friends, family members, teammates and coaches.

“Having my friends here means so much,” Tomlinson said. “I’ve been training with them, and they’re my friends. It’s really important to me.”

Among that group was Audrey Tomlinson, Alaina’s twin sister and teammate in cross country.

They were born five minutes apart, and they’ll remain together after high school since Audrey will also be attending Georgia State.

Audrey Tomlinson is an accomplished athlete in her own right.

She has been a successful runner and was a member of the cross-country team that participated in the state meet in Carrollton earlier this month, and she’s also on the LaGrange swim team.

“I’m really proud of her,” Audrey Tomlinson said. “She works so hard.”

Audrey Tomlinson said she has enjoyed the chance to run with her sister, and all of her teammates.

“It’s been so much fun,” she said. “I spend so much time doing it. Looking back on it, I wouldn’t want to spend my time any other way. I really do like cross country.”

Among her most noteworthy achievements was winning three consecutive region titles in cross country, and she has been a state placer in that sport and cross country.

One of her coaches at LaGrange, Brett Bowie, believes Tomlinson has an opportunity to move right into the Georgia State cross-country lineup as a freshman.

“I think she has a good chance of running with their top seven,” Bowie said. “I think we’ll see her excel, I really good. I feel like she’s going to do great. I’ve enjoyed coaching her. It’s been a lot of fun. We’ll miss her next year, and her sister.”

Alaina Tomlinson said there haven’t been any shortcuts to success.

She’s out there just about every day hitting the pavement, rain or shine. LaGrange High’s Alaina Tomlinson with her family members and coaches during her signing ceremony last week. Tomlinson was a standout in cross country and track and field for LaGrange. Kevin Eckleberry | Daily News

http://lagrangenews.com/wp-content/uploads/sites/37/2016/11/web1_tomlinson3.jpgLaGrange High’s Alaina Tomlinson with her family members and coaches during her signing ceremony last week. Tomlinson was a standout in cross country and track and field for LaGrange. Kevin Eckleberry | Daily News

Troup’s high-scoring offense gets it done