‘We need to honor all our veterans’ 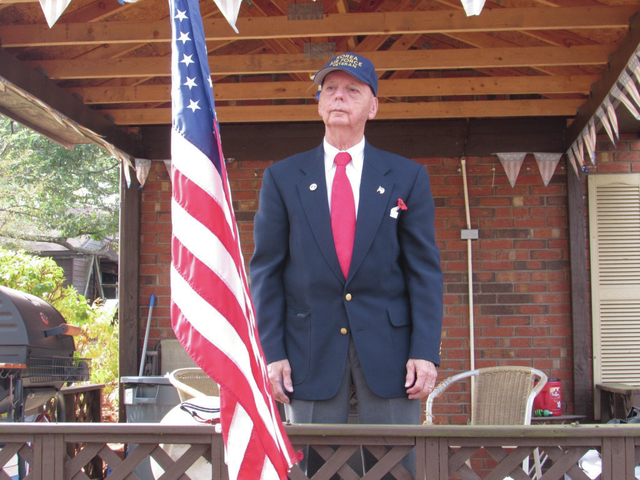 The poppy is a historical reminder for Sledge of the military invasion of Flanders Field in France during World War I. The field was filled with poppies as allied soldiers made their way into the heat of battle, Sledge stated.

Some soldiers came home; many did not, he said.

The poppies and soldiers’ sacrifice remained with Sledge as he prepared to be drafted into service for the Korean War.

Instead, Sledge enlisted in the Air Force when he was only 17 years old.

“My dad had to sign up for me. At that point in my life, I was your typical teenager and was going down the wrong path,” Sledge remembered. “He said, ‘Son, you’re asking me to do something that if I do it, then everything after that is out of my hands.’

“But it was probably the decision in my life,” Sledge said. “In the military, I learned discipline. It changed my entire life. I’m probably here because of that decision … I got off the wrong path and onto the right one. The military made a man out of me.”

His service started in 1951. Sledge was an engine auxiliary operator and part of a secret squadron that flew B-17 drone airplanes in the Pacific Ocean during the Korean War.

When the group deployed overseas, they were even stationed on an unnamed island in the Pacific for more than a year, he said.

“It was a very top secret operation. We were away from everyone else … No one knew about it. We had to be quiet about it,” the veteran explained.

Sledge served four years with the Air Force and retired in 1955.

Those four years of military service plus the sacrifices of countless others, gradually grew more important to Sledge. Veteran’s Day is now a tradition for Sledge every year.

“It means a lot more to me today than in years past,” Sledge said. “It used to be just another day. When I grew older, I thought about all the men and women who gave it all or suffered disabilities … I’ve been blessed with good health and no injuries.”

“I can remember as a child, growing up in Shawmut (now Valley), Alabama during World War II. They drafted all the young men and the middle age men went off to war … all that was left was older men and the women. Women had to start working in the mills … I distinctly remember the Western Union man riding his bicycle through town. You knew whatever house he stopped at that someone had died in the war … He (Western Union employee) delivered a lot of telegrams to our town … telegrams that said,’We’re sorry to inform you that your son was killed in action.’”

A few years ago, Sledge decided to take his pride for America one step further. He single handedly sketched, carved and painted life size wooden silhouettes to honor military personnel, plus all first responders.

Sledge placed them around his front lawn, on a hill that overlooks New Franklin Road, with a sign that read, “Thank you for your service.”

Almost every year, the veteran will add a new piece to the display.

The wooden statuettes stand in solemn silence all year long and remain lit up at night.

“They (figurines) all mean something to me,” Sledge said. “Most of them are battlefield scenes, so I added the horse drawn caisson last year. This is when the soldiers come home and are buried.”

Sledge hopes more people will continue honor veterans on the holiday – and every day – especially as the older generations pass away.

“It won’t be long before there won’t be anymore veterans from World War II or the Korean War,” he said. “We need to honor all our veterans for the sacrifices they make every day.” Frank Sledge stands proudly next to the American flag flying in front of his LaGrange home. Sledge served in the Air Force from 1951 – 1955, during the height of the Korean War.

http://lagrangenews.com/wp-content/uploads/sites/37/2016/11/web1_FrankSledge2.jpgFrank Sledge stands proudly next to the American flag flying in front of his LaGrange home. Sledge served in the Air Force from 1951 – 1955, during the height of the Korean War.

School board pleased with ‘Opportunity’s’ failure