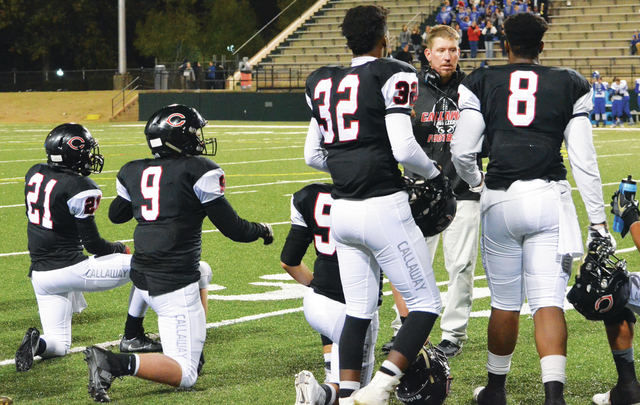 HOGANSVILLE – This has been the stumbling block for the Callaway Cavaliers the past two seasons.

Callaway made it to the second round of the state playoffs in 2014 and 2015, but it was unable to advance any further either year.

In 2014, LaGrange beat Ringgold 35-7 in the first round of the playoffs, but it lost to Washington County 31-7 the following week.

Last year, Callaway handled Hart County 38-20 in the opening round before falling to eventual state champion Westminster 49-28 in the second round at Callaway Stadium.

Callaway (11-0) will try to reverse its second-round fortunes when it hosts Brooks County on Friday, with kickoff set for 7:30 p.m. at Callaway Stadium.

“We’re trying to go all the way,” Callaway running back DJ Atkins said. “That’s what we’re working toward.”

Brooks County (8-3), the third-place team from Region 1-AA, edged Southwest Macon 20-14 last week to advance to the second round.

If Callaway wins on Friday, it would advance to the elite eight to play either Douglass-Atlanta or Screven County.

Brooks County ended the regular season with a 41-17 win over Berrien before going on the road to beat Southwest last week.

Southwest had the ball at the end with a chance to win the game, but a last-gasp pass in the end zone fell incomplete, and Brooks County survived.

A year ago, the Trojans went 10-3 and made it to the Class AA quarterfinals before losing to Greater Atlanta Christian 23-12.

In the regular-season finale against Berrien that secured the region’s number three seed, Brown had a 50-yard touchdown run, and Sutton and Holden combined for 106 yards on 19 carries.

For Callaway, last week’s game was more of the same.

The Cavaliers have known nothing but success this season, and they’ve won each of their 11 games by double digits.

While the machine seems to be operating at peak efficiency, offensive lineman Jalen Moss said there’s still plenty of room for improvement.

If Callaway prevails this week, it would reach the quarterfinals for the third time school history.

In 2009, Callaway made it to the quarterfinals for the first time, and it lost to Fitzgerald 35-21.

Callaway has now won at least one playoff game every year but one since 2008.

The Callaway Cavaliers will host Brooks County in the second round of the Class AA state playoffs on Friday. Kevin Eckleberry | Daily News

http://lagrangenews.com/wp-content/uploads/sites/37/2016/11/web1_CHS2-5.jpgThe Callaway Cavaliers will host Brooks County in the second round of the Class AA state playoffs on Friday. Kevin Eckleberry | Daily News