It was a special season for Troup 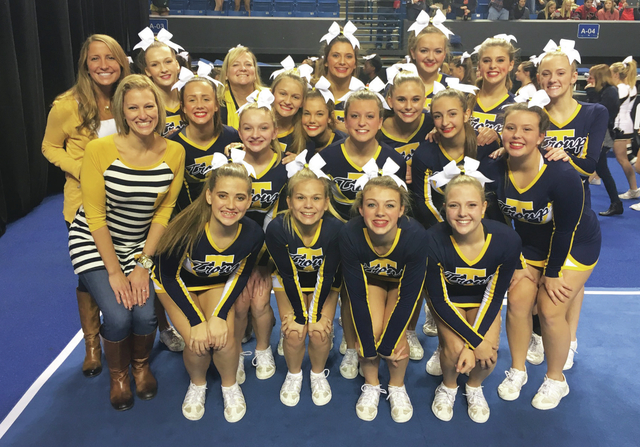 COLUMBUS – They knew it was going to be hard to top what they did a year ago.

The Troup High cheerleaders ended the 2015 season by placing sixth in the Class AAAA state finals, and that put the cap on a phenomenal season.

As Troup got together on Aug. 1 for the first practice, though, the team members were committed to making this season an even more successful one.

Troup ended an exceptional season by finishing fourth in the Class AAAA state finals on Saturday at the Columbus Civic Center.

On Friday, also at the Columbus Civic Center, Troup finished first in the 16-team state sectional to earn its spot in the finals.

“They’ve had a great season,” Troup head coach Amelia Key said. “They put together one of the most entertaining, difficult routines in the state. People enjoyed watching them. They were proud of their accomplishments.”

The rest of the team is coming back, and Key said they’re already taking about improving on their fourth-place finish next year.

“That was the mindset when they left on Saturday,” Key said. “As a coach, you want them to celebrate finishing fourth, but they were disappointed it wasn’t first.”

When Troup’s cheerleaders look back on the season, they’ll have plenty to be proud of.

Troup finished first twice, and it had a handful of other high finishes, including a runner-up finish in the Region 5-AAAA meet.

Troup went out in style with an impeccable 2 1/2-minute performance on Saturday morning, and the cheerleaders left it in the hands of the judges.

When the Tigers were done performing, they had to wait and see if they were one of the top six teams that would be called down to the floor.

Troup didn’t have to wait long.

The six finalists were called in random order, and Troup was first among those teams.

It’s the second straight year Troup got to experience being one of the six finalists.

“To hear your name called down there, it’s such a big deal realizing how good these competitors are,” Key said.

After the sixth and fifth-place teams were revealed, Troup was announced as the fourth-place team.

LaGrange finished third, Chestatee was second, and Cedartown was the state champion.

In an indication of the caliber of competition Troup faced throughout the season, three of the teams from its region were among the top four teams.

Troup was fourth, LaGrange was third, and Cedartown was first.

After finishing second to Cedartown in the region competition, Troup headed into the state sectional full of confidence.

The team then went out and delivered a brilliant performance to take top honors among the 16 teams in the sectional.

“They came off the floor just ecstatic about what they’d accomplished,” Key said. “They were a young team. Some of them had never performed in that venue, and you never know how that’s going to play out. They did an amazing job. I told them the mats were the same size. The last thing I said was, I love you, do your job.”

Key said she’s appreciative of the encouragement the team received from the school and the community.

“They’ve been supporting the kids and bragging on them,” she said. “It’s great for the kids to know they have that support.”