Plenty of fireworks for Cavaliers in playoff win 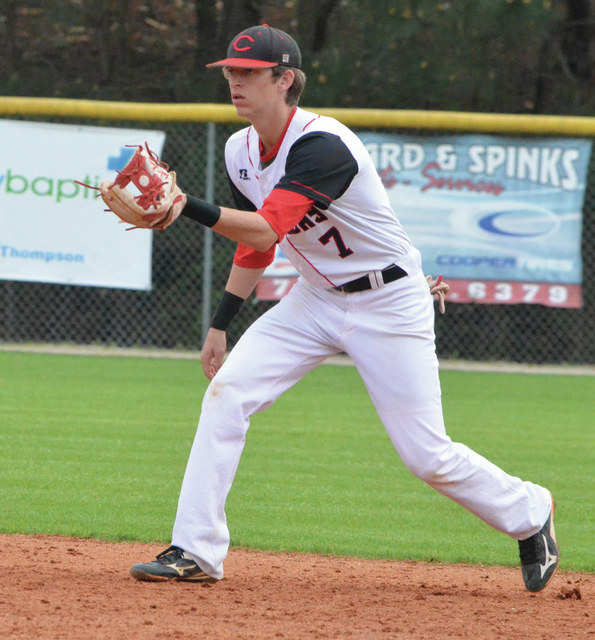 LAGRANGE – Have yourself a day Michael Freeman.

Freeman, a senior on the Callaway High football team, did a bit of everything during Friday’s 55-20 victory over Model in the opening round of the Class AA state playoffs.

Freeman plays tight end on offense, and he had two touchdown receptions against Model, including a phenomenal one-handed catch in the second quarter.

Freeman is also a standout linebacker, and he led the Cavaliers in tackles with 13 and had a sack.

Freeman’s first touchdown came with 3:56 to play in the first quarter when he found himself alone in the end zone and made the 11-yard catch from Dylan Johnson.

The difficulty factor was a bit higher on Freeman’s second touchdown.

The Cavaliers were facing third-and-goal from the 23-yard line when Johnson rifled a pass in Freeman’s direction.

Freeman turned just as the ball was arriving, and he made a sensational one-handed grab for the touchdown.

Making a catch with one hand is something Freeman has actually worked on in practice, so he was ready to make it happen in a game.

“When I started playing tight end, it’s something I started doing just to play around with,” Freeman said. “I never really wanted to try that in a game because I didn’t want to mess up. I turned around and Dylan had already thrown the ball. I jumped and stuck my hand out, and it just happened.”

RECORD DAY: With his five touchdown passes in the win over Model, Callaway’s Dylan Johnson set the school’s single-game record in that category.

That was part of a remarkably efficient day for Johnson.

Johnson completed 7-of-9 passes for 141 yards, so more than half of the passes Johnson threw went for touchdowns.

In addition to the two scoring passes he threw to Freeman, Johnson also found Braylon Sanders for a pair of touchdowns, one for 60 yards, and one for 21 yards.

Another one of Johnson’s favorite targets this season, junior DQ Wilkerson, had a 24-yard scoring catch in the third quarter.

GOING THE DISTANCE: The Model Blue Devils looked like they were about to put the ball in the end zone.

Model was trailing 21-6 when it had the ball on the Callaway 3-yard line late in the first half.

Model’s starting quarterback, Kyler Eldridge, had run the ball down to 3, but he landed awkardly on his head, and he had to be taken off the field on a stretcher.

After a lengthy delay, Evan Burger entered the game at quarterback, and he was fighting for extra yardage when he lost the ball right at the goal line.

Sanders scooped the ball up and started racing downfield, and he had nothing but green turf in front of him.

That was part of a huge day for Sanders, who also had touchdown catches of 60 and 21 yards.

TWO-WAY THREAT: Fullback Jibrell Jackson is mostly a blocker for Callaway, but he knows what to do when he gets the ball in his hands.

In Friday’s game, Jackson had an 8-yard touchdown run where he bulldozed over a Model defender near the goal line.

Jackson was also the lead blocker on a lot of the runs for DJ Atkins, who had more than 200 yards.

Jackson also saw significant playing time on defense as a linebacker, and he had eight tackles, second most on the team.

Sapp finished with five tackles, and he had three sacks.

In the fourth quarter, Sapp forced a fumble that was returned to the Model 32-yard line by Kedrick Ramsey.

BIG NUMBERS: Model’s defense had no answer for Callaway running back DJ Atkins.

Atkins, a junior, ran for 214 yards, an he averaged nearly 12 yards per attempt.

Atkins thought he’d scored on a 51-yard run early in the third quarter, but one of the officials ruled that he stepped out of bounds at the 8-yard line.

On the next play, Atkins took advantage of some nice blocking and got the touchdown anyway.

“It feels good,” Atkins said of getting in the end zone. “I know my linemen block to try to get me in the end zone. For me to finally get in there, I know they’re as happy as I am. If it wasn’t for them, I couldn’t up there anyway. I love my linemen. Callaway’s DJ Atkins had a big night running the ball, and he scored one of his team’s seven touchdowns. Photo by Eddie Sherrer

http://lagrangenews.com/wp-content/uploads/sites/37/2016/11/web1_CHS4-3.jpgCallaway’s DJ Atkins had a big night running the ball, and he scored one of his team’s seven touchdowns. Photo by Eddie Sherrer