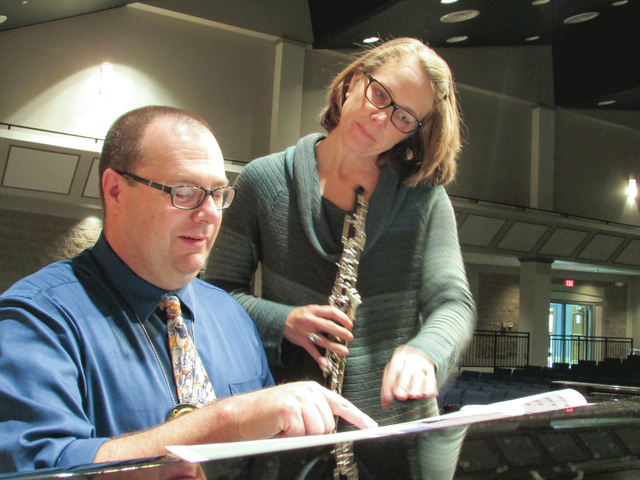 LaGRANGE — When the Choral Society of West Georgia performs “The Prayer of Serenity” this weekend at its annual holiday concert, audience members will hear familiar, biblical words set to music.

But not everyone in the crowd may be familiar with the composer of the piece: LaGrange Police Sgt. Robert Kirby. Kirby heads up part of the Criminal Investigation Section within the department.

Kirby composed the ‘Prayer of Serenity’ in 2013 in honor of the 21-year-old daughter of his former band director at Jacksonville State University in Alabama. Molly McBride was killed in a car accident in Kentucky in May of that same year.

“I didn’t have to force the notes. The piece would just speak to me,” Kirby explained. “I took dictation as the notes would come to me … within a week I had a rough draft. I sent it to Dr. Scott McBride (Molly’s father) and he was moved by it … on Oct. 17, 2013, the Morehead State University choir performed it (Dr. McBride now heads up music department there). It was also played at graduation that following year where Molly graduated posthumously. I was extremely honored.”

Dr. McBride later told Kirby he was on a university-related trip in China when he received the news his daughter was killed. As the department head flew home, he and the Morehead State University President prayed the Serenity Prayer during the entire plane ride back to Kentucky.

Kirby’s rendition of the “Prayer of Serenity” was performed by other musical groups.

Earlier this summer, Kirby sent the piece to Bettie Biggs, artistic director of the Choral Society of West Georgia. Biggs liked it so much, she included it in the group’s 10th annual “We Gather Together Concert of Praise, Thanksgiving and Remembrance,” said Kirby.

Kirby’s wife, Kathy, will also perform the piece as a soloist on the oboe.

Robert Kirby said he is honored the “Prayer of Serenity” was selected by Biggs.

“For me, the challenge of a modern day composer is to get their music performed,” Kirby stated. “When your music is performed, it brings it to life. That’s very meaningful to me, especially in the community where we live, where we’ve raised our family and where people know you.”

The “Prayer of Serenity” was not the first piece composed by Kirby. He was commissioned by the LaGrange Symphony Orchestra to write a musical selection. Kirby also composes songs for various churches and marching bands, he said.

While Kirby insisted composing music is “just a hobby” for him, his background proves otherwise.

During this time, he also worked as a security officer and a supervisor at Six Flags Over Georgia. Kirby’s interest in law enforcement peaked. A short time later he joined the LaGrange Police Department and has been there for 14 years.

But his career with LPD has not diminished his love for composing music.

His pieces have played in more than six states across the nation, Kirby said.

“I wrote a piece for the Central Florida Symphony Orchestra. They commissioned me to write a music featuring NASA’s Apollo program,” he remembered.

Kirby also composed the “Colombine Requiem” in honor of the victims killed during the 1999 Colorado school massacre. The piece includes 13 chimes; one for each person who died.

Kirby received an honorable mention for his piece “Backwoods Expression” in the International Double Reed competition.

“For me, music is a great way to have others feel the emotion that I feel,” Kirby explained. “Think about movie scores. When you add the right music to a scene, you stir up emotions that coincide with the acting on the screen. That’s how a composer wants you to feel.”

“I’m proud of him,” said Kathy Kirby. “… Sometimes he writes a piece and forgets about the (musical) range of an instrument, so I’ll help him out with that … but I like to hear the end result … I like to play his music. It’s good for an oboist.”

Both Robert and Kathy Kirby will also perform other songs with the Choral Society of West Georgia this weekend during its annual concert. Sgt. Robert Kirby and Kathy Kirby, his wife revise some of the musical measures in the ‘Prayer of Serenity.’ Kathy Kirby will play a solo on her oboe during the concert next weekend. Robert Kirby composed the piece after the death of Molly McBride, 21. McBride was the daughter of the couple’s college band director.

http://lagrangenews.com/wp-content/uploads/sites/37/2016/11/web1_Kirby3-1.jpgSgt. Robert Kirby and Kathy Kirby, his wife revise some of the musical measures in the ‘Prayer of Serenity.’ Kathy Kirby will play a solo on her oboe during the concert next weekend. Robert Kirby composed the piece after the death of Molly McBride, 21. McBride was the daughter of the couple’s college band director.