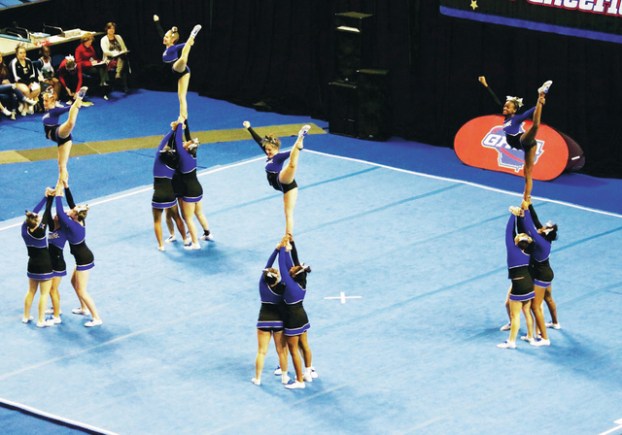 COLUMBUS – A spectacularly successful season came to a close in fine fashion for the LaGrange High cheerleading team on Saturday in the state finals in Columbus.

In the last performance of the season, LaGrange came out and dazzled the crowd at the Columbus Civic Center with a near flawless 2 1/2-minute routine that resulted in a third-place finish.

After all of the Class AAAA teams finished performing, the top six teams were announced in no particular order, and those teams made their way down to the floor.

LaGrange, along with Troup High, was among those teams.

With the cheerleaders from the top six teams anxiously looking on, the order was revealed.

The first two teams were announced, and LaGrange and Troup had yet to hear their names called.

Then the fourth-place team was announced, and it was Troup, and LaGrange finished one spot ahead in third place.

Chestatee was Class AAAA’s second-place team, and Cedartown was the state champion.

Region 5-AAAA was well-represented in the top four.

LaGrange had a remarkable season.

LaGrange placed first in three competitions, and it was second twice, most recently in the state sectional on Friday.

It was the final go-around for LaGrange’s five seniors, Javiyana Burden, Kennedy Burks, Kaitlyn Kuhn, Callye Ann Chastain and Sarah Kate Cadenhead, who were also a part of the team that finished 11th in Class AAAAA a year ago.

Leading up to the state sectional, Chastain said it has been an enjoyable season in part because of how close everyone is.

“It’s awesome. These are my sisters,” she said. “They’re my best friends. It’s so much fun. I wouldn’t trade it for anything.”

LaGrange had a five-point deduction during its routine on Saturday, and head coach Stephanie Hall said there was some concern that it might have cost the team a spot in the top six.

The tension only ratcheted up as the team names were called as LaGrange was kept waiting.

“Their goal all year had been to make top six,” Hall said. “With that little mishap, they were worried. When they were calling out the top six, we were the last team to be called. We knew we should have been called, but you never know.”

When LaGrange’s name was called, the cheerleaders exploded, and there was another outburst when the third-place finish was revealed.

“When they got called to the floor, they were in tears,” Hall said. “They were the happiest third-place team ever.”

Hall called it an “amazing season,” and she said it’s not easy saying goodbye to everyone, especially the five seniors. By Kevin Eckleberry kevin.eckleberry@lagrangenews.com LAGRANGE – Have yourself a day Michael Freeman. Freeman, a senior on the Callaway High football... read more