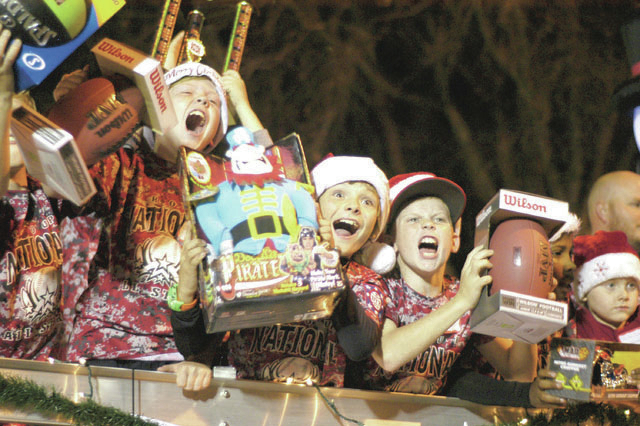 LaGRANGE – The Chamber of Commerce will host its 40th annual LaGrange-Troup County Christmas Parade at 6 p.m. on Dec. 1. The tree lighting will begin at 5:30 p.m. and the parade is expected to step off from Granger Park. It will make its way to downtown LaGrange along Church Street, down Bull Street and will travel up Main Street past Lafayette Square on its way back to Granger Park.

The parade will be led by Grand Marshal Jane Fryer, who served with the LaGrange-Troup County Chamber of Commerce for more than 40 years and retired as its president in 2008.

“I was so shocked, it took me a second or two to understand what was happening. I didn’t know what to say — how could I say no in front of all those people,” Fryer said about the day she was named to lead the parade. “I reluctantly accepted the offer but make no mistake, it is a very big honor and I was honored that the chamber would think of me.”

The theme of the parade is “A Star is Born,” which was inspired by the 1977 musical hit movie that featured big-time screen stars Barbra Streisand and Kris Kristofferson.

Said Parade Coordinator LeTisha Smith, “It is fitting that this year’s theme honors Jane Fryer as grand marshal, some 43 years after her ‘Star’ chamber career was born.”

The parade will feature floats, marching bands, motorized vechicles, and a special appearance from Santa Claus to start the event off. There is a $40 registration fee for each parade entry, and each entry is asked to donate an unwrapped Christmas toy. All toys that are submitted will be donated to the Marine Corps Toys for Tots campaign in Troup County.

Parade applications are available online at the chamber’s website www.lagrangechamber.com/special-events or at the Chamber’s office located at 111 Bull St. in downtown LaGrange. Applications must be submitted with entry fee and a toy or toys by 5 p.m. on Friday.

Director of Tourism Dave Marler expects the parade to be a success.

“The parade will again be an outstanding event that brings the community together in the spirit of the season,” said Marler.

For more information regarding the parade, visit www.lagrangtechamber.com or contact Smith at 706-884-8671 or via email at letisha@lagrangechamber.com. Members of the Troup Nationals All-Star baseball team react to the crowd at the 2014 LaGrange-Troup County Chamber of Commerce Christmas Parade in downtown LaGrange.

http://lagrangenews.com/wp-content/uploads/sites/37/2016/11/web1_parade.jpgMembers of the Troup Nationals All-Star baseball team react to the crowd at the 2014 LaGrange-Troup County Chamber of Commerce Christmas Parade in downtown LaGrange.