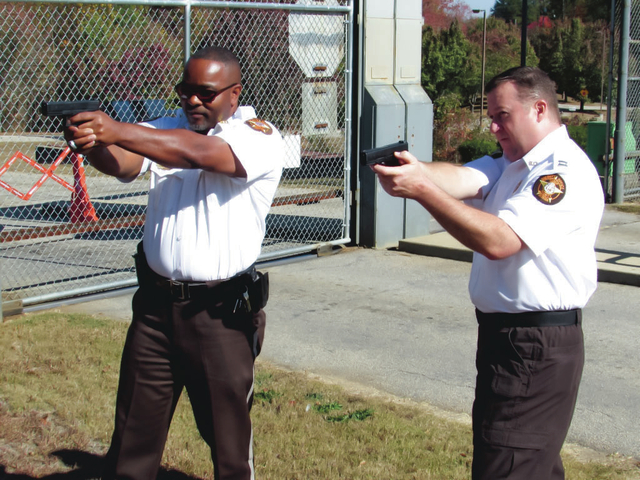 LaGRANGE — Gunfire, exploding targets, a little “smack talk” and plenty of comraderie will be on tap this weekend at the second annual Troup County Sheriff’s Office Top Shot event.

The friendly competition pits local law enforcement officers and first responders against each other to see who has the best aim.

“We don’t have one dimensional targets,” said Deputy Joy Burnham, office manager for TCSO. “We have targets that blow up, targets that spew out … no one knows what they’re going to shoot beforehand. Everything will be a surprise.

“We had ‘Joy’s Snack Shop’ last year,” she continued. “We had jars filled with bubble gum and candy. We had the contestants shooting at the jars. Everyone loved it and we’re cheering for the contestants.”

Local police chiefs and Troup County Sheriff James Woodruff will also compete against each other to see who is really “top dog” in the county. They do not use live ammo, instead the chiefs and Woodruff are handed improvised weapons, such as a water gun and a sling shot, Burnham said with a laugh.

Burnham started the competition two years ago as a way to raise money for Relay for Life and bring local law enforcement agencies together.

“Before James (Sheriff James Woodruff) was elected, we (TCSO) didn’t have a good working relationship with other law enforcement agencies because of the past administration,” Burnham explained. “During a Relay for Life meeting, the organizer said we could hold individual events … I thought about it and prayed. I liked watching the Top Shot show and I thought, ‘We could do something like that here.’

“If your different law enforcement agencies can work, play and train together, then their relationships will get better … and they have,” she said.

This year, the Top Shot competition will include a “Spectator Shoot” for the first 10 people who show up to the event. Those 10 folks will compete and fire at targets in a controlled environment, Burnham said.

All the money raised from Top Shot stays in the community and benefit the local Relay for Life.

“Yes, there are bragging rights for the winner, but this is really a win/win for everyone involved,” Burnham said. “It’s good for the community and this year, with the ‘Spectator Shoot,’ we’re saying, ‘Come on in. You’re a part of us.’

“You get to meet your local public safety folks and it is a very fun event,” she continued. “You won’t be sorry if you come out … it is a good, local event. Everyone that is involved is doing it just for fun.”

The second annual Top Shot event will be on Saturday, Nov. 19 at the old Georgia State Patrol post on Hamilton Road, just down the street from the Troup County Jail.

The competition will kick off at 9 a.m.

The cost is $2 per person. Everyone will be given a bracelet that will allow them to come and go from the event, along with ear protection.

Top Shot T-shirts will also be sold at the event, as well as hot dogs, hamburgers and drinks.