School board to vote on purchases 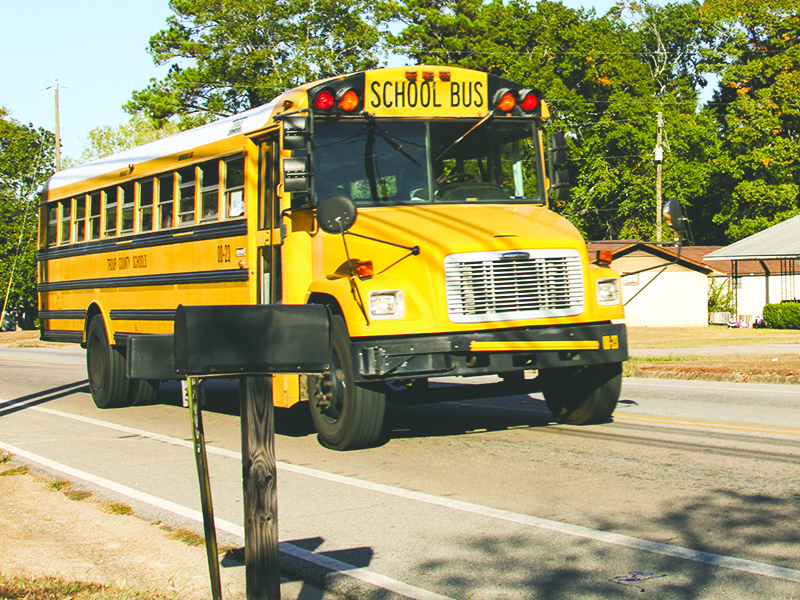 LaGRANGE – A good education is the one purchase that no one can ever take away, and the Troup County Board of Education plans to review parts of that purchase tonight.

The board plans to vote on several purchase proposals for local schools and buses that they hope will improve the quality of education within the school system.

The school board plans to decide whether to purchase new cameras for its buses to replace old cameras that are no longer serving their intended use. The board hopes that the new cameras will improve security – and possibly even safety – on board the buses.

“Years ago the school system supplied security cameras on school buses, and those have been failing at an alarming rate,” said Assistant Superintendent for Maintenance and Operations John Radcliffe. “They are old, and they are certainly not state of the art. This will bring the system up to state of the art systems with operable cameras on the buses in multiple areas, so that we can determine what is happening on the bus at any given time.”

The 128 new camera systems and instillation is estimated to cost $332,972.99. The REI Digital Camera Systems are engineered specifically for school buses and would be installed by Alpha Communications, Inc. If the cameras are approved, the school board hopes to have them installed by January.

The school board also plans to review a request from schools to purchase Dell Chromebooks for classroom use with Title 1 funding at the meeting. Laptops have played a large part in the Read 180 and System 44 programs and also make it easier for students to do research for classes.

“It is to purchase Chromebooks, and this is how those schools choose to use some of their individual school allocated Title 1 funds,” said Assistant Superintendent Karen Cagle at Tuesday’s caucus meeting.

Title 1 funding is a type of formula grant that was established by the Federal Elementary and Secondary Education Act. The grant aims to provide financial assistance to “schools with high numbers or high percentages of children from low income families to help ensure that all children meet challenging state academic standards,” according the U.S. Department of education’s website.

“Not all schools receive the same amount of Title 1 funding,” said Cagle. “Title 1 funding is allocated based on the number of students you have and the poverty rate of the school, and schools are put into a poverty tier ranking, so that schools at the higher tier receive more funding then schools of a lower tier.”

“Some schools choose to spend (the funding) on personnel,” said Cagle. “… Berta is using a large amount of their Title 1 funds for personnel.”

The classroom of the 21st century

“It updates the classroom into the 21st Century model,” said Radcliffe. “… It’s a much more modern look.”

The new furniture would be paid for with SPLOST funds and would include soft seating, new tables, and high top tables similar the furniture that has already been added at Ethel Kight Elementary School and Callaway High School’s lunchroom.

The Read 180 and System 44 programs both aim to help students who have fallen behind their grade level improve reading and comprehension skills using a combination of group reading, personal reading time and computer programs. The first report on the program is not expected until January, but program organizers claim to be seeing strong improvements in students who participate in the programs.

Even as the school board works to bring classrooms “into the 21st Century,” funds raised by SPLOST – special-purpose, local-option sales tax – have lagged behind both projections and previous SPLOST numbers. The funds raised by SPLOST are a major part of how Troup County Schools can afford projects ranging from basic upkeep on schools where state funding is limited to security cameras for buses.

“14 months in a row, we are down SPLOST (funding) $880 thousand this year as compared to $899 (thousand) last year,” said Chief Financial Officer Byron Jones.

This year’s SPLOST was expected to take in $1,023,679 a month, but the current collection for this year has averaged only $877,650 a month for the first three months of the current SPLOST year. According to Jones, many counties in the state are experiencing the same problem, and there are several possible reasons that could have put collections 14.3 percent behind projections for the year to date.

“There is a couple of things with the gas tax… where gas prices are lower than they used to be – which impacts that a little bit – and some exemptions statewide that have come on board that we used to not have,” he said. “… So there may be a few things that are impacting that a little bit because we are a large land mass county.”

The last five year’s SPLOST funds have all raised less money than originally anticipated, but this year has experienced the greatest difference between projections and actual collection yet. However, thanks to the new developments within the county, the board hopes that the trend will come to an end during the next SPLOST, beginning in July.

“The Great Wolf Project is slated to get going spring of (2018), so the tail end of the first year of SPLOST V will hopefully – if that materializes – we’ll get to see some positive things to get that turned around.”

Troup County Schools are currently under budget for the year and expect revenue for the schools to be in better shape after property taxes that were due on Tuesdayhave been processed. The school board also plans to review improvements for several existing schools at the meeting.

The Troup County School Board is scheduled to meet tonight at 5:30 p.m. at the Board Room of the Administrative Services Building at 100 Davis Road.