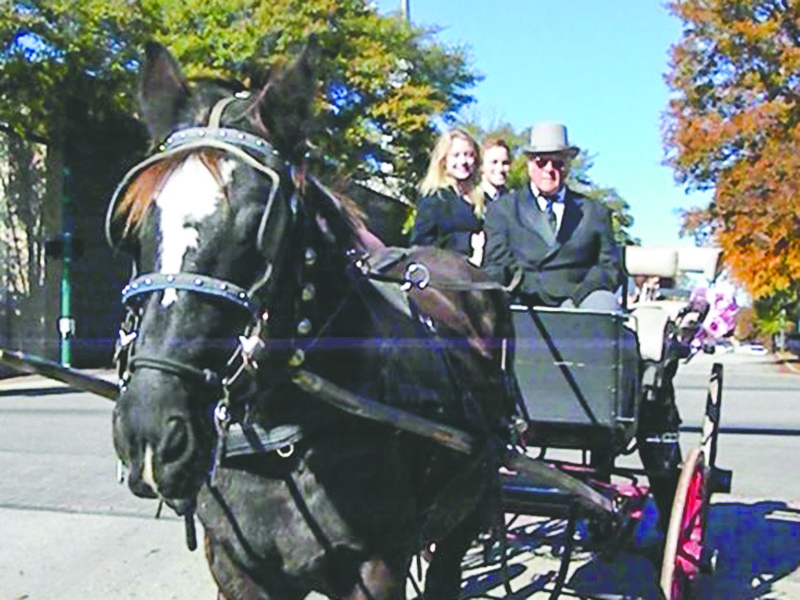 Free carriage rides will be available on Friday during the Sip and Shop in downtown LaGrange. The Downtown Development Authority encourages tipping the drivers. (Alicia B. Hill | Daily News)

LaGRANGE – For anyone who wants to beat the Black Friday rush and support local business at the same time, LaGrange and Hogansville have a surefire plan to kick off the holiday season this weekend.

Shops in downtown LaGrange and Hogansville are set to be open for extra hours this weekend for events that will to allow locals to get a head start on their holiday shopping and support the local economy.

Downtown LaGrange plans to kick off the weekend and the holiday season on Friday with its annual Sip and Shop, featuring caroling by the Sons of LaFayette and free carriage rides. The Downtown Development Authority encourages tips for the rides.  About 19 stores are expected to participate in the event.

“It’s just a fun night and a lot of people have a tradition of coming out,” said Barbie Watts, director of promotions and marketing for the DDA.

Farmer’s Insurance is set to hold an open house at the event where they plan to hold a drawing for a $100 gift certificate for stores in downtown LaGrange, and Merle Norman plans to hold a drawing for a $25 gift card for its store. For book lovers, Southern author, Lee St. John, is set to sign her book “She’s a Keeper! Bombshells from a Southern Girl’s Basement” at Stephen’s Exclusives during the event. The stores also plan to serve snacks and wine during the event.

“We’re really looking forward to it,” said Debbie Terrell of Plum Southern, who plans to serve wine from the Warm Springs Vineyard and Winery during the event.

Benefits from the Sip and Shop will go to the Court Appointed Special Advocates program for children, according to Watts.  CASA supports and promotes court appointed volunteer advocacy for children from neglectful or abusive homes, and based on the turnout from other years, the funds raised by the event could make a big difference for those children.

“We look forward to having a big crowd,” said Larry Fair of Red Door Antiques. “Last year we had over 300 people.”

“Each shop will have a different variety of food and drinks, and we will have caroling and Christmas decorations,” said Mary Stewart of William & Mary’s Antiques.

This year, two new shops – Be Inspired Boutique and High Cotton Antique Mall – are scheduled to participate in the event, and Van Byars is scheduled to hold an antiques and furniture auction at that time. Hogansville’s artist’s community will also be on display this weekend with the first part of a new display.

“At 404 E. Main Street, visitors can take a peek at the giant hummingbirds in the window,” said Gayle Devereaux of Blue Train Books. “The fiberglass birds, which are part of a tourism project, are in the process of being painted by local artists. The project is similar to Newnan’s ponies on the square. The first hummingbird has been completed and is mounted on a pole in Askew Park.”

Hogansville’s Sip ‘n’ Shop is also slated to include the opening of an exhibit titled “A Good Soldier” at The Suffering Artist gallery. The show will be a tribute to veterans and is supposed to include about 14 original works of art by local artists and photos of veterans.

“This is an original way to show my love for my country, and my love for the arts,” said Sarah Swanson of The Suffering Artist. “It’s kind of a good way to meld the two.”

The show is free to the public, and the art displayed will be available for purchase. State Rep. Bob Trammell is supposed to speak at the opening along with Hogansville Mayor Bill Stankiewicz.  The show is set to continue through Jan. 7.

On Sunday, LaGrange plans to continue the holiday fun with a Holiday Open House downtown where downtown stores will be open during the day for shoppers.

“It’s a good way to kick of the holiday season,” said Watts, of the open house.