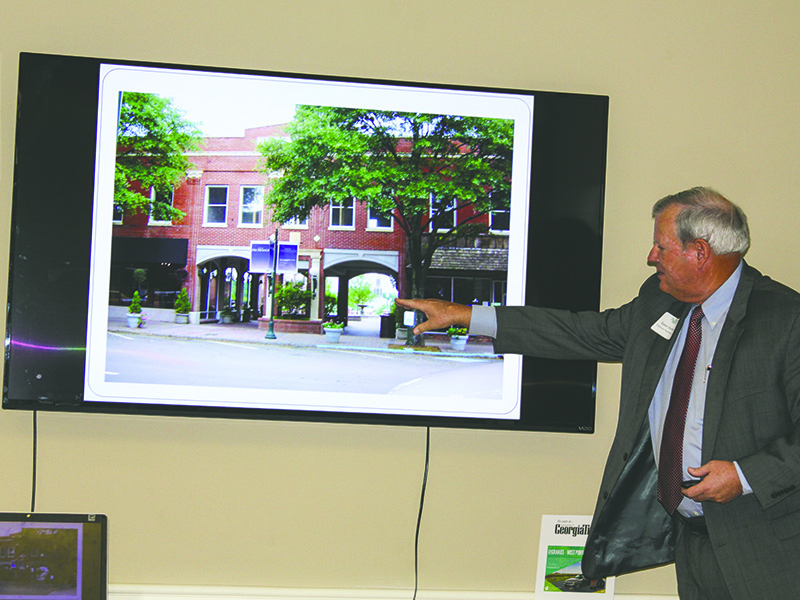 Speer Burette, Callaway Foundation president, points out some of the improvements made to downtown like the Promenade walkway that goes from the parking lot behind Charlie Joseph's to the parking deck beside the LaGrange Art Museum. (Alicia B. Hill | Daily News)

LaGRANGE – Young professionals from around LaGrange gathered on Thursday to hear local leaders talk about some of LaGrange’s progress in the last few years and what projects may be on the horizon.

City officials and local foundations have worked hard in the last few years to improve the city’s downtown and attract businesses and people to the area with better buildings to live and work in.

“That is what it is all about,” said Bobby Carmichael, president of LaGrange’s Downtown Development Authority, when speaking to Hype Troup, the young professionals’ group associated with the LaGrange-Troup County Chamber of Commerce.  “It is creating density in the downtown area.”

Natives to LaGrange know that the city has seen ups and downs for businesses in the downtown area, but downtown improvements have been the result of far more then luck.  That change took planning and purpose on the part of the Callaway Foundation and the Downtown Development Authority.

“Going back to 2000, the Callaway Foundation decided that they wanted to refocus on how the money was spent, and we essentially took half of the money that we give away on an annual basis with the foundation, and we said to spend that money – that’s about $5 million a year – for projects that are proactive,” said Speer Burdette, Callaway Foundation president. “(The money is pledged for) things that we think we need to do in the community.”

One of the projects that the Callaway Foundation decided to focus on was the possibility of having an inn on the square. When the idea was initially proposed in the early 2000s, the foundation considered having the inn on the Cleveland Motors site, where it would have had fronts on Morgan Street and LaFayette Square. Instead, the city broke ground on a Courtyard by Marriott on the opposite side of the square this fall at the site of the old Mansour’s building, and the city and the DDA both hope that hotel will entice more business to the downtown area.

“If you flash back to the year 2000, downtown LaGrange was really vacant,” said Burdette. “We had no parking problem after 5 o’clock because there was no… reason to come downtown, so we wanted to see what we could do to energize our downtown.”

The addition of new restaurants, stores and event venues downtown has caused a surge of activity to the point that there are now complaints about lack of parking even with the parking deck and the variety of free parking lots downtown.

The DDA and the Callaway Foundation have advocated a wide variety of downtown improvement projects through the years like Sweetland Amphitheatre, the Troup County Government Center, the Promenade, the Del’avant event space, the Carmike 10 building and the District 4 Health building. Some of the projects – like the hotel – did not go in the same way that they were originally planned, but in most cases the way they went in worked out in the end.

“Our intention was that the Promenade would go straight across and go through where Venucci’s is,” said Burdette. “… It is there because we were able to purchase the property, and as it turned out, that is where it should have been all along.”

The Promenade’s path to the back of the LaGrange Art Museum has allowed for additional open community space at that end of the walkway and a clearer path to the museum.

In the future, the DDA and the Callaway Foundation are looking to encourage more people to live and work downtown. There are also possible plans for a new skate park and a local brewery coming to downtown at a future date.