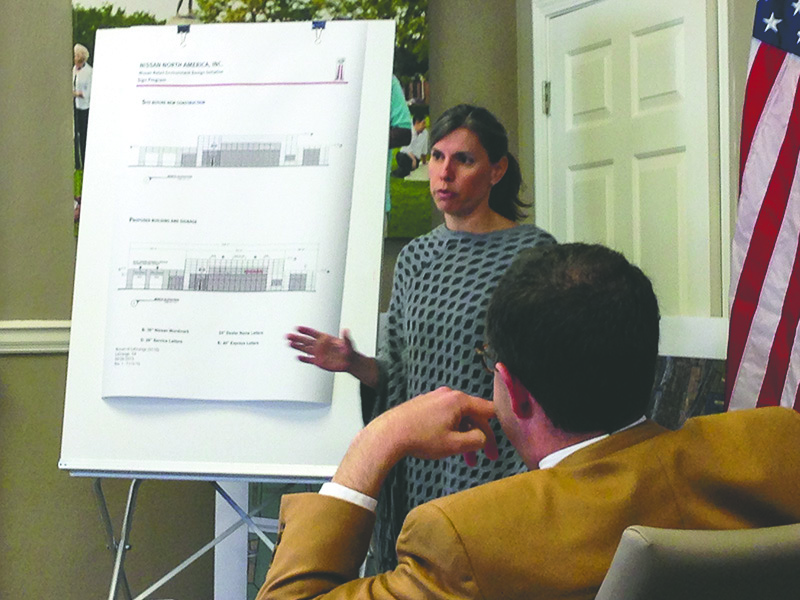 LaGrange Senior Planner Leigh Threadgill goes over proposed changes to the city's sign ordinance at a work session on Tuesday.

LaGRANGE – A variance for a sign at the Nissan dealership under construction on LaFayette Parkway has brought to light a need to revise the current city sign ordinance.

The dealership has requested a variance to have five large wall signs on the building: the Nissan logo, the word “LaGrange,” the word “Nissan” and two directional signs for the service department.  The section of the building that would have the service department signs is recessed approximately 35 feet back from the rest of the front of the building.  Under the current ordinance, the number of signs would be considered excessive, making it necessary for the city to grant a variance for the signage.

“One of the challenges that I have noticed since coming on board is the frequency with which we get variances to this standard,” said Senior Planner Leigh Threadgill. “… In 2013, I know we granted a very similar variance for Mike Patton Honda, so this sort of in line with what we have done in the past with the planning board… something we feel like we can feel good about approving of.”

The city also granted a similar variance to the Toyota dealership for signage in the past, and the council members agreed that the number of signs was within reason for the building despite being against the city’s current sign ordinance.

“It’s not going to be one flat wall with five wall signs,” said Threadgill. “You’ll have three wall signs on this wall closest to the street and these two wall signs that say ‘service’ and ‘express’ – which is really a way finding. It is really just helpful for people there on the site to know where to go.”

The council did express caution on the topic of consistency however, and several members of the council expressed a desire to make allowances consistent with the variances made at the Honda and Toyota dealerships.

The city is currently in the process of changing its sign ordinance, but the rewrite is still in progress. The current ordinance was made by an earlier council in order to avoid too much clutter in signage on roadsides or confusing signage.

“Several years ago… the council didn’t want signage and everything to look distorted like some of the other cities that they brought the cities’ names up,” said Edmundson. “… It is aesthetic or something like that. It was very restrictive.”

Other signage types were discussed, but wall signs have proved to require more variances than anything else.

“We are not getting a lot of requests for height or size or anything like that, so maybe people are basically content with those rules. Maybe we need to tweak the number of wall signs rules,” said Mayor Jim Thornton.

The primary change to the sign ordinance would be the number of signs on the front of buildings, according to officials.

“The way you know to change your code is if you keep getting asked for a variance on the same thing, and so that is why we are changing the rule,” said Threadgill.  “… I do think (the new ordinance) is easier to understand, and I think that it will help us be more in line with other cities and current. I think that it is just old, and it is very hard to understand right now.”

The LaGrange City Council hopes to finish revising the sign variance in the near future.  The public hearing regarding the Nissan dealership signs is scheduled for Dec. 13 at 5:30 p.m. at 208 Ridley Ave.