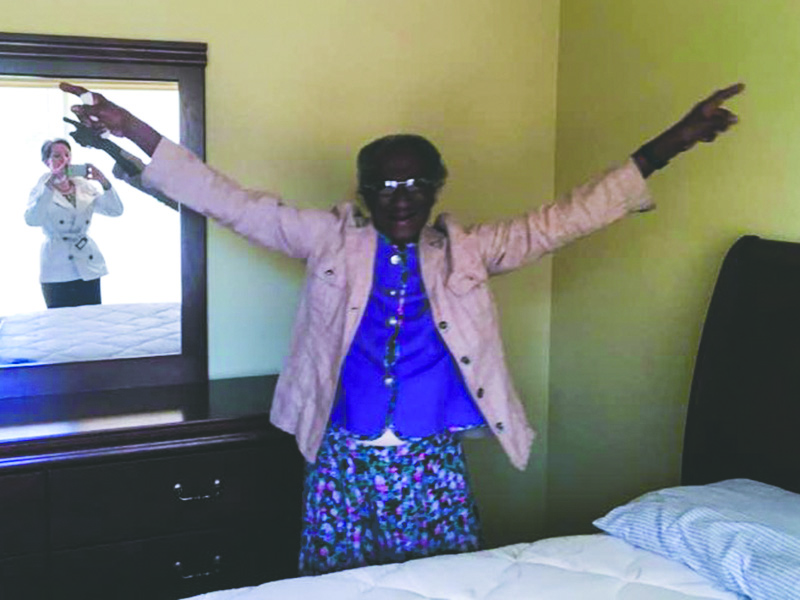 LaGRANGE – As we gather around the table and give thanks, it is important to remember those who have given so much to make our communities a better place.

Jeffery Fulghum who owns NWM Furniture helped build a home for a local family with the Fuller Center for Housing back in September, but he didn’t stop there.  After the home was built, he proceeded to donate all of the furniture needed to make the house a home. This was Fulghum’s fifth year helping with a build.

“I met (Fuller) back in the 90s, and he was just an awesome guy, and so when we were able to start helping out we wanted to get involved,” said Fulghum. “So, my wife and I started volunteering.  Our family actually sponsored a house in 2009. It was called the Legacy build.”

The Millard Fuller Legacy Build commemorated Millard Fuller who founded the Fuller Center for Housing in 2005 and had died unexpectedly in February of 2009. The Fuller Foundation has been active in the Chattahoochee Valley area since 2007. Fuller also co-founded Habitat for Humanity with his wife, Linda Fuller in 1976.

Fulghum has been a major part of the Fuller Foundation builds in the past, but this year he went above and beyond by providing furniture to for the new home owner.

Fulghum donated two queen bedroom sets, a twin bedroom set, a living room set, and kitchen appliances to the new home owner from his store.  This generous gift was far from astounding for those who work with him.

“It was not a surprise to me that he stepped up immediately,” said Judi Osterhout, Fulgham’s assistant. “I mean that is just what he does. … He was so excited about being able to furnish the place.”

Personal connections are common between volunteers and house recipients are common according to the Fuller Center, who aims to build better lives for those who receive the homes built by their foundation.

“We actually stay with our families for 20 years just to make sure they’re okay and to help them with any issues that may arise,” said Fuller Center Executive Director Kim Roberts. “… We are here to help those who need a hands up to change their lives and their children’s lives.”

The actual build took place in September and went up fairly quickly thanks to organization and planning, along with plenty of help.

“This is the first year that I’ve donated the furniture, but I’ve been helping build the houses for about five years now,” said Fulghum. “This year I was actually the co-captain of the house that we donated this furniture to.”

Fulghum co-captained the September build with Alan Jewell.  They started construction with a concrete slab on Monday, and by 3 p.m on Friday, they had the home fully built and ready to dedicate. The home that they built was called the Veteran’s House because the house went to the wife of a Veteran.  The house was the 34 of 36 houses the foundation has built.

The group was able to build the home so quickly because of assistance from a Kentucky group who helped by building the framework ahead of time.

“(Crossroads Missions has) an architect lays the walls out in sections, and splits it up into 8 foot section walls, and so then they have… all the people in the church come together on a Saturday, and they’ll put together these walls in a parking lot,” said Fulghum. “… They’ll build the walls and stand them up, and then screw them together, and they’ll actually build the frame of the house – the structure of the house – in a parking lot.  Then they go through and they write scriptures on the walls… Then they’ll take the house apart, load it up into a truck, and send it with us with the instructions on how to put it back together.”

Fulghum was clearly passionate about the project, and the relationship that he and his wife had built with the new homeowners, and he looks forward to future projects.

“It is about not only receiving but giving as well,” said Fulghum. “… We are doing two more this year: the Veteran’s build that is going to be held in April… it will be in the Valley area though and then the regular build which is in September.”

The recipients of the homes pay back the cost of the actual build without interest, but local groups make it possible for the builds to make an even bigger impact.

“They are required to pay what it took to build the house at no interest,” said Fulghum. “… Home Depot also helped us with this project. They donated $15,000. … They’ve been a long time sponsor for these houses.”

The generosity of local individuals in projects like this is invaluable to the community and making our world a better place.

“I think people need to know that there are still people out there that listen to the needs of others,” said Osterhout.

Anyone who would like to be involved with the Fuller Center for Housing’s future projects can apply to volunteer at fullercenter.org or by calling 334-524-6827. NWM Furniture is located at 900 Hogansville Road in LaGrange.