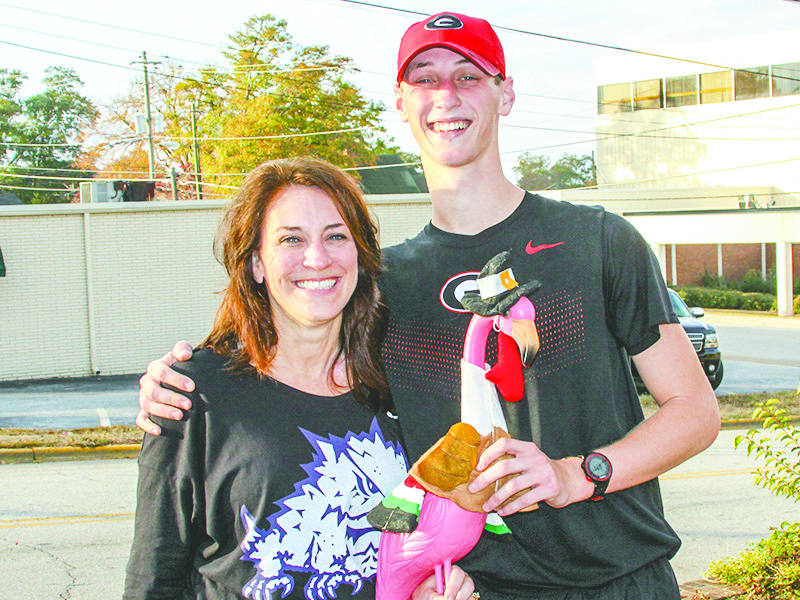 LaGRANGE – For the sixth year in a row, runners gathered to kick off their Thanksgiving early with a charity run in downtown LaGrange.

The sixth annual Turkey Trot raised $1000 for the All Things New Orphanage in Hati that was founded LaGrange Natives by Matt and Jessica Bush. The orphanage took a direct hit from Hurricane Matthew back in October.

“(Lord) thank you for all the people who have come out to run to celebrate, also to all those who have given to (All Things New) Orphanage,” said Hollis Hand Principal Jack Morman, in a dedication prayer before the race. “We thank you for those who work so hard with that ministry, and taking care of those children.”

In past years, the race has sponsored a variety of charities, and it has slowly become a local tradition for area runners. Organizers aim for the race that is more about fun then race times.

“Six years ago, some of us just decided to go out for a run on Thanksgiving morning, and everybody came,” said Lisa Alford. “The next year we were like ‘let’s do t-shirts,’ ‘let’s do it this way,’ and that is how it kind of evolved to getting the pumpkin pie – canned pumpkin pie – as the race winner or these turkey-flamingos (that) come back year after year even with college students who win it.”

The race began at the Inner Path Yoga Studio, and from there, runners ran all the way over to Hollis Hand Elementary School and back, passing LaGrange High School. The self described fun run, did have a few faster runners though, who ran at impressive speeds.

“The more miles you run the better you run,” laughed Jonathan Pelham who ran the course twice on Thursday morning. “… It’s a lot of fun. I love it.”

Pelham won the race and plans to take his flamingo-turkey award back with him to school at the University of Georgia where he is a sophomore on a running scholarship. The LaGrange native started the race with the rest of the runners and completed his second lap of the course well before the last racer crossed the finish line.  This was his second year winning the race.

Organizers hope the Turkey Trot will continue to grow in future years, and remarked that this year had a great turnout.  To learn more about the All Things New Orphanage in Hati or make additional donations, go to allthingsneworphanage.com.