Sons of LaFayette bring the sound of Christmas to LaGrange 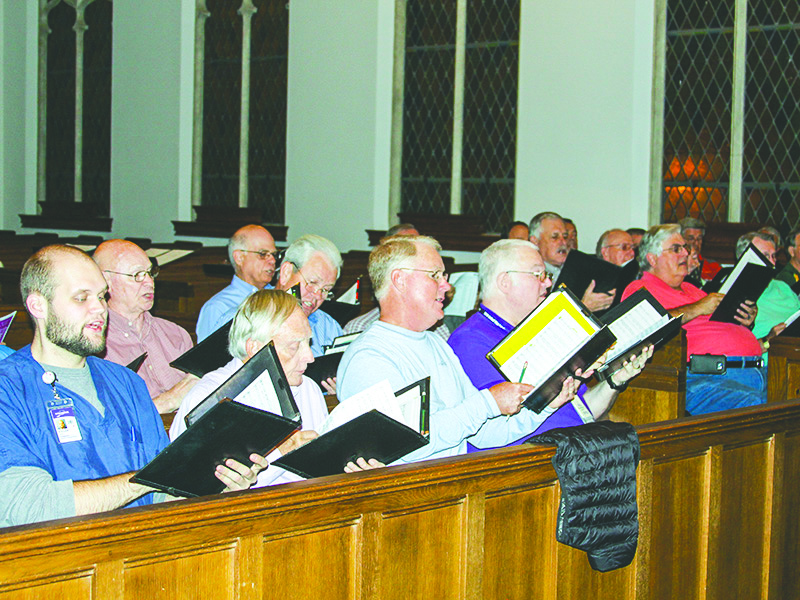 Sons of LaFayette practice on Monday for their Saturday concert at First Presbyterian Church in downtown LaGrange.

LaGRANGE – First Presbyterian Church of LaGrange is set to be filled with plenty of fa-la-la-las on Saturday with the Sons of LaFayette’s Christmas concert.

The Sons of LaFayette have been preparing for months for a Christmas concert filled with lively pieces and different styles of music, and on Saturday, the results of all their practice and collaboration will be ready for all to hear.

“I pride myself in doing a variety of music, so there is something for everybody on this concert -from traditional choral holiday pieces to things that are fun – thus indicated by the title of the concert ‘Fa-la-la-la LaFayette,’” said Beth Everett, artistic director. “We do a lot of pieces that use the fa-la-la-la-la text, so that should be fun.”

The group has already had two other performances during this Christmas season with a series of carols at LaGrange’s annual “Sip & Shop” and a performance at the Biltmore Estates “Christmas Candlelight Tour.” They are one of only a few all-male choirs in Georgia, and their skill at bringing music to life has only grown with the introduction of Everett for this concert season.

“(Gloria) is probably our biggest challenge piece, and I knew that coming in,” said Everett. “It is the traditional Gloria text, but a more modern setting of it, so it has a lot of challenges, but I think people are really going to enjoy it.”

The rendition of “Gloria” that the group will be preforming is by Randol Alan Bass and is set to be accompanied by a guest organist. A variety of guest musicians are scheduled to perform with the band including violinists, pianists and percussionists, and classic songs are not the only thing that can be expected from the concert.

“A brand new (carol) that is really a contemporary – the “Joseph’s Lullaby” – which is a really striking piece,” said Harrison Cain, president of the group. “It is serious, but it is the other end of those traditional things to – that’s (written) in the last few years.”

“Joseph’s Lullaby” was originally recorded by the Christian group, MercyMe in 2005 and was written to be a lullaby for baby Jesus. Among other interesting selections, the Sons of LaFayette also plan to sing a rendition of a song from the Nutcracker.

“I really enjoy working with them,” said Everett. “Everybody always comes in ready to work hard, and I think that will show to the people who come to our concerts.”

The group is likewise glad to have Everett as their new director, even if she is the one woman directing the group of 43 men.

“Every one of our guys is super excited to have her,” said Cain. “Her expertise is really pushing us which is exactly what our selection group said – we want to be pushed. … We want to be challenged, but we want it with a kindness to it. She is a perfect fit for us. Just a really good fit.”

Everett is also the choral director at LaGrange College where she has worked for the last three years.