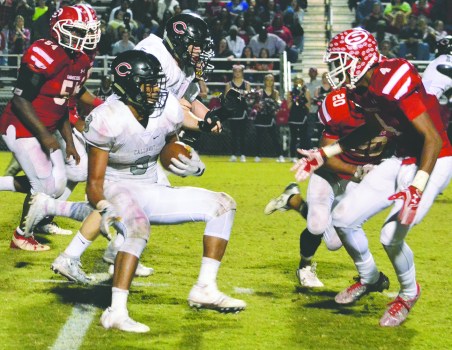 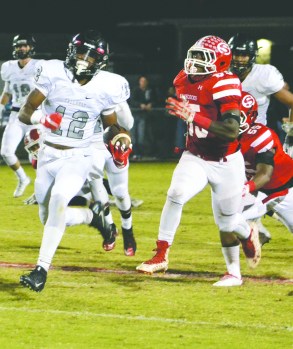 Braylon Sanders returns a kickoff for a touchdown. 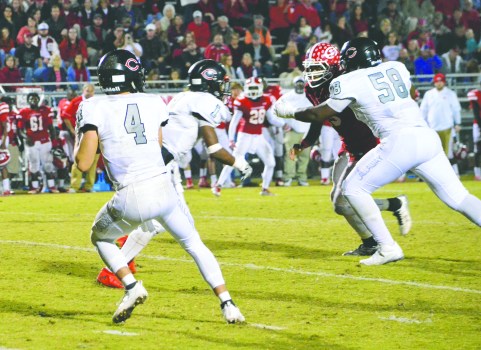 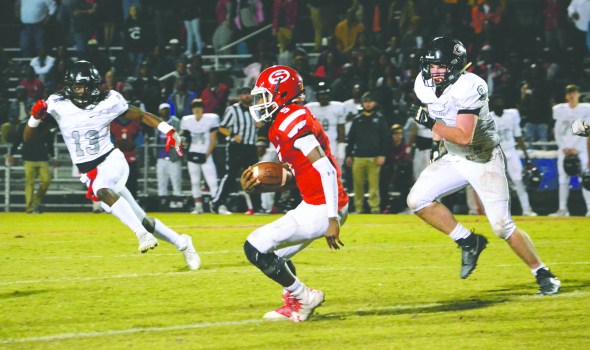 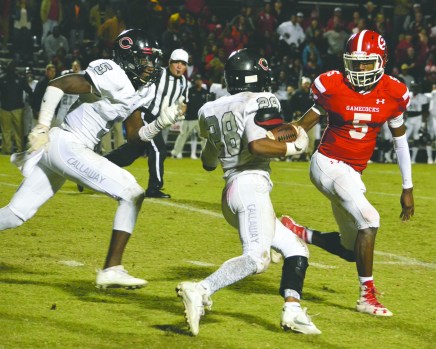 Callaway's Tely Fanning returns a fumble in the first half. 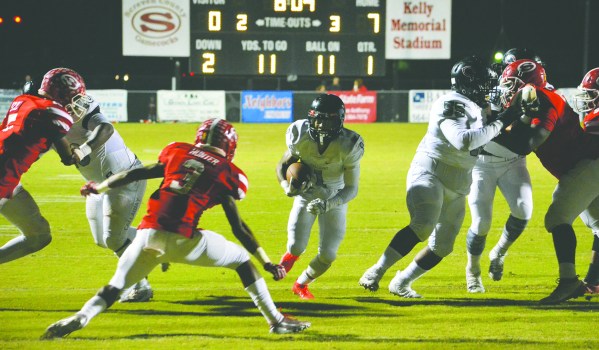 Callaway's DJ Atkins runs up the middle during the first half. 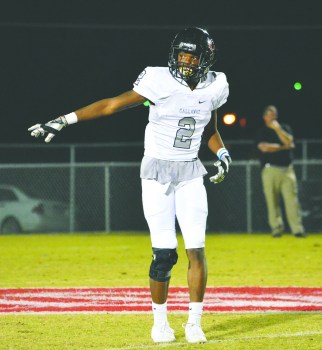 DQ Wilkerson had a touchdown catch for Callaway.

SYLVANIA – They had 98 yards to go, and a little more than two minutes to make it happen.

That’s what was confronting the Callaway Cavaliers on Friday night as they fought to keep their season alive against Screven County in the quarterfinals of the Class AA state playoffs.

After a Screven County punt, Callaway took over at its own 2-yard line trailing 34-29, and there was 2:26 showing on the clock.

If the Cavaliers could find a way to go the distance and score a touchdown, their state-championship hopes would still be alive.

It was a tall task, but this is a team that has been knocking down mountains all season, so there was plenty of confidence as the players huddled in the Callaway end zone at the start of the drive.

“We’ve been here before,” Callaway running back DJ Atkins said. “We remember against Handley we were down 21-7 at halftime. We know we’re a second-half team. We know we’re going to fight.”

The Cavaliers moved the ball down the field until they were facing a fourth-and-seven at the Gamecocks’ 47-yard line.

Callaway quarterback Dylan Johnson rolled out, and he connected with fellow senior Braylon Sanders for a first down.

Sanders wasn’t satisfied with just moving the chains, though.

Sanders caught the ball in stride, and he took off toward the end zone, and as he approached the goal line he went airborne and scored the go-ahead touchdown.

The two-point conversion attempt was unsuccessful, but it didn’t matter.

The Cavaliers had the one-point lead.

The Gamecocks ran one play when they got the ball back before the clock ran out, and the Cavaliers celebrated a remarkable, breath-taking 35-34 victory.

Callaway (13-0) will face Benedictine (13-0) in the final four on Friday, with the winner getting a chance to play for the state championship in the Georgia Dome.

“We talk about these kids leaving everything they’ve got on the field, every day, and they did that tonight,” Callaway head coach Pete Wiggins said. “They never gave up. They believe in each other. I’m so proud of this football team and this community.”

The final touchdown put the cap on a wild second half that saw the two teams combine for 52 points, and Callaway scored 32 of them.

Each time the Gamecocks appeared to be taking control, the Cavaliers answered.

In the closing moments, Callaway’s defense made a huge stand and forced a punt, giving the offense a chance to go win the game.

On the final drive, Callaway converted three fourth-down plays, one on a keeper by Johnson, and the other on a 10-yard carry by Atkins.

On the third and final fourth-down play of that drive, it was Sanders driving a dagger into Screven County’s hopes.

When Sanders caught the ball, he said he knew where his destination was.

Sanders, who had two scoring catches while also returning a kickoff for a touchdown, said he was thinking end zone “all the way.”

“I knew nobody was going to stop me from getting in the end zone,” he added.

That was just one of a bunch of big plays the Cavaliers produced throughout the game.

In the first half, Callaway’s only points came on a 26-yard field goal by Noah Stephens in the first quarter.

Screven County scored two first-half touchdowns to build a 14-3 lead at the break.

Callaway needed a spark coming out of the locker room, and Sanders provided it.

Sanders took the opening kickoff of the second half, and he returned it for a touchdown, and with 11:45 left in the third quarter, Screven County’s lead was down to 14-10.

That was the start of the second-half scoring parade.

Screven County scored to go up 21-10, but Callaway came right back with a 62-yard touchdown drive that was capped by Jibrell Jackson’s 4-yard run.

Callaway then showed off its quick-strike ability, with Johnson finding DQ Wilkerson for a 63-yard touchdown, and with 10 seconds left in the third quarter, Screven’s lead was 28-23.

Screven County then embarked on a 60-yard scoring drive that ate up more than half of the fourth quarter, and Lewis Wallace’s 16-yard touchdown catch on fourth down pushed the lead to 34-23 with 5:43 to play.

The Cavaliers needed to score, and they needed to do it quickly, and they made it happen.

The Gamecocks had a chance to run out the clock and end the suspense, but they were stopped on third down and they had to punt.

The punt pinned the Cavaliers deep in their own territory, but it turns out they had just enough time to deliver an epic 98-yard drive and move one step closer to a state title.