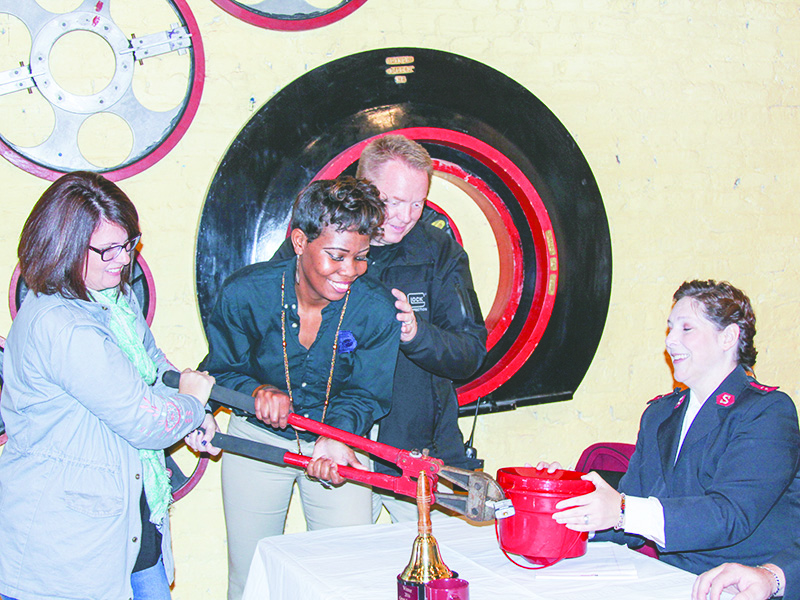 Kristin Lester, Michelle Meadows and Chief Tony Bailey of West Point cut the lock off of their kettle. The West Point team raised $7,256 for the Salvation Army on Friday.

The Kettle Bell race challenged teams from different communities on who could raise the most money for the Salvation Army, and Bailey and his team have been working on their winning plan since last year when Hogansville’s team raised roughly $200 more.

“It’s a team effort,” said Bailey. “Everybody worked hard, and it was just exciting for us to get out and – I’m not going to lie, we look forward to this from last year. We knew that this was going to be an exciting time for us and Hogansville.”

“There has been so much build up for this year because last year Hogansville won and watching Chief Bailey almost acting like a teenager with this whole thing has been really comical,” said Guy Nickum, Salvation Army officer. “Knowing that he really wanted to win this, and he straight out said last year that ‘I will win this next year.’ He lived up to it.”

Salvation Army representatives thanked all the participants and those who donated during the race and were hopeful for a LaGrange team again next year.  The teams were likewise thankful for the contributions from both cities.

“We had a lot of fun with a little friendly competition,” said David McKibben of Hogansville. “We are very appreciative of our contributors, and our competition.”

The Salvation Army plans to continue raising money with kettles through Christmas Eve and is in need of volunteers to ring bells.  To volunteer, call 706-881-5241.