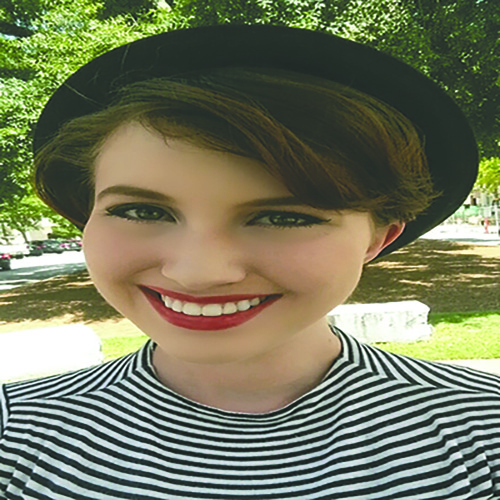 LaGRANGE- Having epilepsy doesn’t have to hold you back from accomplishing certain things you want to achieve in your life.

Olivia Grego is a living proof of that.

Grego, a former Troup High School student, is currently a freshman at Columbus State University and is majoring in Theatre Education.

A regular freshman attending college many would think. Not at all.

Grego, 18, has a disorder called epilepsy.

Epilepsy is a neurological disorder where the nerve cell activity in the brain is disturbed causing episodes of seizures, loss of consciousness, convulsion and sensory disturbance.

Grego was first diagnosed with epilepsy in sixth grade. Before finding out she had the disorder, she was aware of epilepsy but knew nothing about it.

“In the beginning I would have seizures and just stare off in space. People thought I wasn’t paying attention. I had trouble in school and with my teachers. My grades dropped. The epilepsy started progressing and I started shaking my arm in class at times. Some people thought I was being weird and my friends left me. Being young and having that happen to you that can be traumatizing. I then took sometime away from school,” said Grego.

Grego took time for her and family to learn more about the disorder.

“When I returned back to school in seventh grade, people really didn’t know what I had. I could only go to school for a half -day because I would get severe insomnia but I had the teachers and my friends watching over me,” said Grego.

Her life changed during that period.

“I was constantly under supervision in the beginning,” said Grego. “I had people looking out for me. I went from being a normal 10- or 11-year-old to constantly being watched after by my parents. The good thing is that my last seizure happened when I was in seventh grade.”

Even though the seizures have stopped, challenges remain.

“Today I have to remember to take my medicine everyday. I have shown my friends what to do in case something happens with me so they will be prepared. Some people are scared of what they don’t know but it’s important to educate people about the things there not sure about,” said Grego.

As a student dealing with epilepsy, Grego found out about UCB Family Epilepsy Scholarship program from her sister and applied for it. She was one of 40 recipients in the U.S. awarded the scholarship in 2016.

The UCB is a global biopharmaceutical company focusing on creating value for people living with neurology and immunology conditions. The UCB Family Epilepsy Scholarship recognizes outstanding individuals affected by epilepsy who are pursuing higher education as part of their effort to achieve their dreams and goals

Over the past 12 years, UCB has awarded nearly 400 scholarships totaling $1.9 million to people who have been diagnosed with epilepsy.

“The scholarship has been incredible for me,” said Grego. “Having epilepsy when I was young put a real financial burden on my family. It’s really helped me pursue my dreams and without it I would be in a lot of debt right now. So, having this scholarship has been a blessing.”

Her disorder has not stopped Grego from living her life to the fullest. She has participated in numerous state beauty pageants as a teenager and walked away with wins as Miss North Georgia Mountain in 2013 and Miss Lake Lanier in 2014.

“Winning really gave me a strong platform and even though epilepsy has been terrible at times, it has given me the chance to speak about it to others,” said Grego.

Grego has also gotten the opportunity to be present at several epilepsy awareness events not only in Georgia but across the world.

“I’ve gotten to speak at different organizations. I’ve reached out to different schools, churches and clubs to try to educate them on what epilepsy really is, find out what someone heard about it, and try to erase some of the stigmas around epilepsy. Going out and meeting so many people has improved my public speaking skills and I have become more self-confident going forward talking about my personal experience,” she said.After college, Grego’s main goal is to become a high school teacher and teach children about drama and how beneficial it can be for them. She aims to continue to motivate and inspire people who deal with epilepsy and show them that you can still do all the things that people who don’t have the disorder can do just as well.

If anything, epilepsy isn’t hindering Olivia Grego, it’s only making her chase after her goals even more, she said.

“I have an opportunity to share my story with people all around the world. I feel like it’s my job to inform people about epilepsy and I want to stay involved in as many ways as I can.”