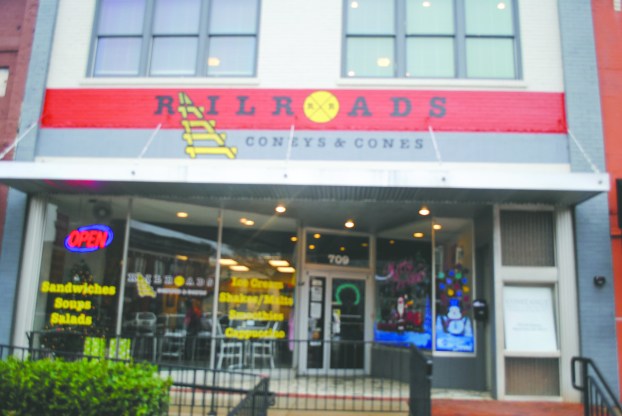 WEST POINT- Railroads is more than just a place that serves hot dogs.

That’s what Jennifer Hill, the manager of Railroads, wants people to know.

“We specialize in hot dogs, different types of hot dogs,” said Hill. “Most people think about hot dogs when they think of Railroads but we have so much more than just hot dogs here.”

Railroads has a wide variety of things to order on their menu spanning from burgers to sandwiches to salads to Philly cheesesteaks to Coneys to nachos to chicken wraps to build-your-own grilled cheese sandwich.

If you want to enjoy something sweet and tasty, then they have milkshakes, smoothies, hand-made ice cream, hand-dip ice cream, banana splits and sundaes for your liking.

However, hot dogs are the food that customers and West Point residents associate the most with Railroads.

Railroads is a small independent restaurant that opened in 2012 and is located in downtown West Point. Matt Livingston, a West Point local and former city of West Point employee is the owner and the brains behind Railroads being put together.

“He (Livingston) originally had an idea for an ice cream place where people could come in and get ice cream but he decided to expand with his plan,” said Hill, who has been the manager at Railroads since April.

Railroads hours run from 11 a.m.-6 p.m. on Monday-Thursday and 11 a.m.-8 p.m. on Fridays and Saturdays. The most crowded period throughout the day is around lunch, with the main meal being hot dogs, Philly cheesesteaks and make-your-own salads that customers usually crave, said Hill.

Railroads also gets involved in serving in small and big catering jobs, weddings and supplying meals to workers at local plants.

“Everything’s made to order. We walk to your table and take your order and like to have that one-on-one interaction with the customers,” said Hill.

The normal crowd that usually comes in at Railroads is a constant mix of younger people (mainly college students from Point University in West Point), older people and families that come in together.

“The atmosphere here is family-oriented. Lots of kids – young and college kids –  come in that I’ve taken in as my own kids,” said Hill. “There are lots of college kids that come in and out every day to just buy a milkshake or get ice cream. They enjoy just coming around and sitting down to talk. I like to care of them like they’re my family.”

“The most enjoyable thing about working here is that everyone here is like family and I like seeing all the kids and families come in to gather to eat,” said Hill.