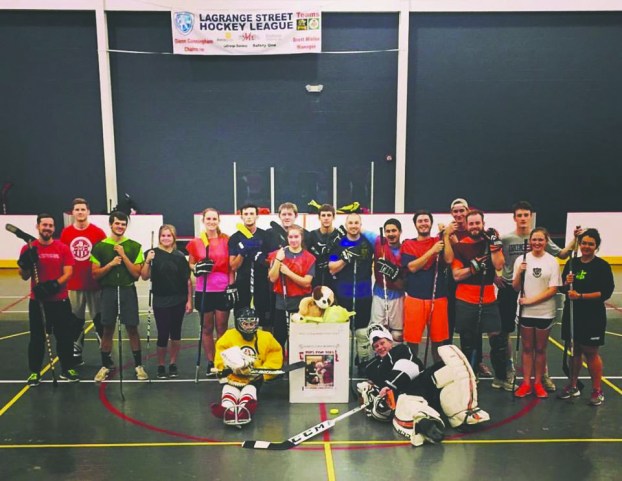 A group of hockey players from The LaGrange Street Hockey League pose for a picture after finishing their 3rd Annual Toys for Tots game on Sunday at the Mike Daniels Recreation Center. (Submitted)

Hockey making its mark in LaGrange

LaGRANGE- Football, basketball and baseball are sports that you would expect to scoop up all the attention and recognition in LaGrange, but make room for hockey.

Hockey in LaGrange is making headway.

The LaGrange Street Hockey League is a league in LaGrange that was formed by two men: Glenn Cunningham and Brett Miolen.

Cunningham is the chairman and founder of the league while Brett Miolen is the manager, who is responsible for reaching out to players and keeping the interest of the league going.

Both are hockey enthusiasts from Massachusetts who came up with the idea one day while working out at the Towne Fitness Club in LaGrange. The league was created on July 21, 2013 and has been going strong ever since.

“We met at the gym and one day and Brett says to me, ‘You know it’s too bad we can’t play street hockey.’ And we thought it would be better to play street hockey or roller hockey than ice hockey because not everyone can skate and we know everyone has sneakers so it would be easier. So we were just two guys who wanted to do something different besides running on a treadmill,” said Cunningham.

The LaGrange Street Hockey League holds all its games – Sundays at 2 p.m. – and practices at the hockey rink at the Mike Daniel Recreation Center, which is a somewhat smaller than an ice hockey rink in the NHL.

The league is set up with no set teams but teams that are split according to tiers based off a player’s experience, skill-level, and ability. Cunningham and Miolen focus on dividing the teams up fairly so there won’t be any mismatches. The games feature players from ages 10-54 (with Cunningham being the oldest player at 54), a player who is a sled hockey player (which is a sit-down version of ice hockey for players with a disability that prevents them from standing up that plays goalie) and a co-ed league.

“The guys play well but the girls play really well and are even further along than some of the guys,” said Cunningham, a massive hockey fan whose favorite player is Boston Bruins legend Bobby Orr.

The street hockey league doesn’t have any referees (both Cunningham and Milen do the officiating while also playing), they don’t keep records or stats because there aren’t enough teams and the players wear no helmets, except for the goaltenders.

“I usually bring all the equipment,” said Cunningham. “The gloves, hockey sticks, pucks, shin guards, pads, protective gear. I always have extra gear for players who might need them.”

“What I like about our league is that it’s free. Kids and people will come in and we will spend time teaching the game of hockey to them or teach them how to skate – if they don’t know how to.”

Cunningham regularly plays goalie during the games and typically wears a different NHL jersey with his last name printed on the back, depending on what mood he might have for that particular color on that day.

“Sometimes I want to wear my (New York) Rangers gear, or my (Philadelphia) Flyers gear, or my (Boston) Bruins gear (Cunningham’s favorite hockey team), or my (Los Angeles) Kings gear. I like to mix the colors up when I’m playing depending on what I might be feeling on that day,” said Cunningham.

As the league expands, Cunningham has had players from basketball, baseball, football, tennis, soccer and local ballerinas that have joined.

“There isn’t a sport that I’ve played or know that can’t show you some aspect of that sport more than in hockey,” said Cunningham.

Cunningham wants to continue to seek athletes from multiple sporting backgrounds and create as much exposure for the LaGrange Street Hockey League as possible.

“I’d like to see the hockey league become one huge league that people from not just LaGrange, but from Coweta County, Douglasville, Columbus, Newman and cities close to Alabama would like to participate in,” said Cunningham.

“Hockey is a sport that has a lot of give.”

By Kevin Eckleberry kevin.eckleberry@lagrangenews.com SAVANNAH – They ran into a better team. That was the reality of the situation for... read more