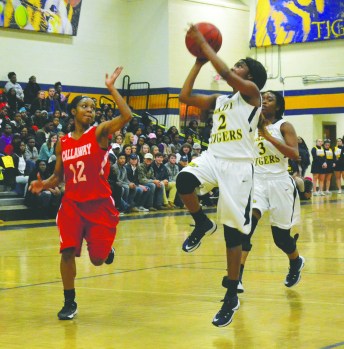 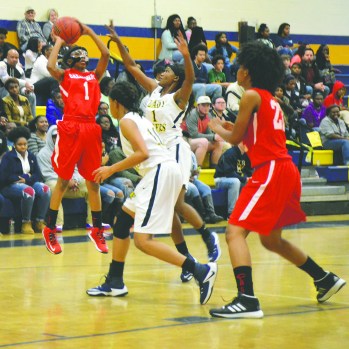 Callaway's KeKe Talley puts up a shot during Friday's game. 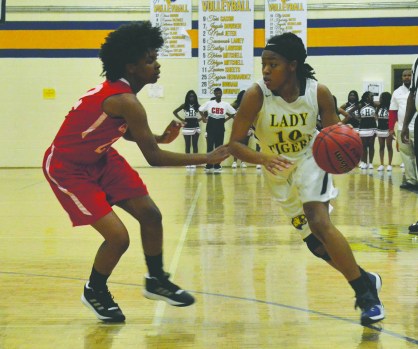 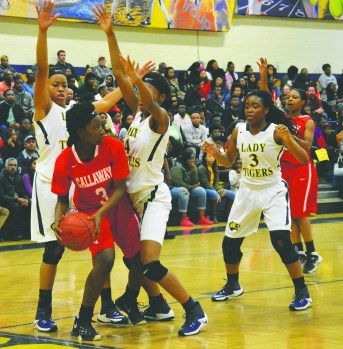 LAGRANGE – A dominant second half powered the Troup Lady Tigers to a 48-32 victory over the visiting Callaway Lady Cavaliers on Friday night.

Troup was clinging to a 20-18 lead at the half, but it outscored Callaway 28-14 in the final two quarters to win going away.

Shaqoya Gilbert led Troup with 13 points and Kwyneshia Spence added 10 points, and they both made three 3-pointers.

Ambert Gilbert contributed eight points, and Akhya Mitchell scored seven points and was 3-of-4 from the free-throw line.

Troup head coach Carla Thornton said everyone who played contributed to the win.

“You love to see team wins like that,” Thornton said. “It took everybody. Everybody did their roles tonight.”

Callaway head coach Deyano Martin said the game got away from his team in the final two quarters.

“They started making a few shots in the second half, and they hit us with a press,” Martin said. “And we turned the ball over a few times. And then you look up, and you’re down double-digits.”

It was tight early, and Beasley’s basket late in the first quarter gave Callaway a 11-8 lead.

Baskets by Cameron and Beasley in the second quarter gave Callaway its biggest lead of the game at 15-8.

That momentum carried over into the second half for Troup.

Gilbert made a pair of 3-pointers and scored eight points in the fourth quarter as Troup maintained a comfortable lead.

“We knew Callaway was going to come out hard,” Thornton said. “We just had to be more focused, and executed. Those were the things that messed us up the last game. We played hard, but we didn’t execute. I think tonight, we ran plays very well. And the girls weren’t afraid to take those shots.”

Callaway and Troup will both be back in action today.