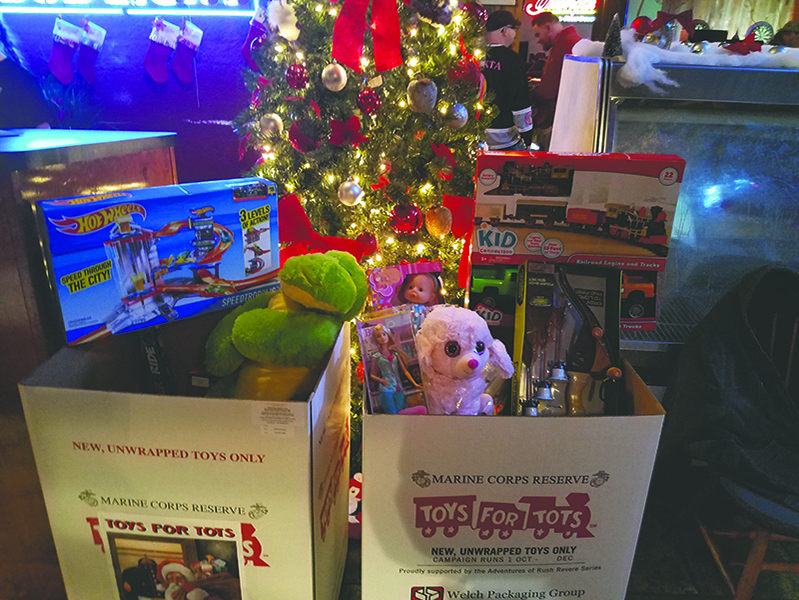 HOGANSVILLE- The atmosphere on Saturday night at Hunter’s Bar and Grill was cheerful and lively and people were in a very giving mood.

Families, couples and people from the area all showed up to the annual Tunes for Tots show to support the Toys for Tots organization, a program run by the United States Marine Corps Reserve. The group distributes toys to children whose parents can’t afford to buy them at Christmas time.

This is the 6th Annual Tunes for Tots concert and the first time the concert has taken place at Hunter’s Bar and Grill. The entire night featured people giving and dropping off toys one by one and placing them in the boxes that sat at the front desk of the grill.

Waves of new toys were brought in throughout the night, from stuffed animals to hot wheel sets, toy trucks, a soccer ball, Barbie dolls, nerf guns, nail design kit sets for little girls, a Star Wars sword, creativity sets and a plethora of other gifts for children.

Within the first 30 minutes of the show, three bags were already filled with toys.

“We’re really excited about this year’s event,” said Josh East, the organizer of the Tunes for Tots concert. “This event is a real big part of my life and it is to these musicians that performed tonight, too. This is a great way for them to show their talents and give back for a good cause.”

The musicians and bands that performed were Daniel Toole, Blood KinFolk, Lights Out, Hollow Sky and Dirt Road Republic.

Toole began the show with a few songs until he closed out with mega pop hit “Closer” from The Chainsmokers.

Blood Kinfolk then performed a series of country, roots and rock songs, as a few members of the crowd hit the dance floor.

The groups Lights Out, Hollow Sky and Dirt Road Republic later performed to cap off the night.

In attendance Saturday night were five Marine Corps League members to represent the Toys for Tots organization and collect the toys, including the local coordinator of Toys for Tots, Bernard Bledsoe.

“Josh does a great job putting this event together,” said Bledsoe. “He puts a lot of pride in this event and we’ve had a good turnout tonight. We’ve filled up a good number of bags with toys. Our goal is to give at least three toys to each kid, including a stocking stuffer if we can.”

“I definitely expect to be involved next year and the year after that,” said East. “It’s a good feeling to know that you can make a difference in your community.”