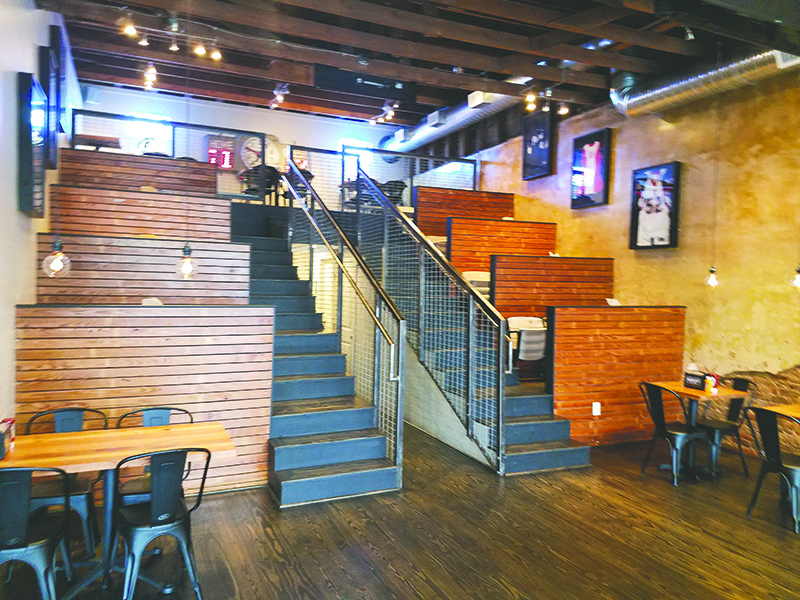 WEST POINT- If you’re looking for a new restaurant in West Point to visit, Coach’s Bar and Grill is waiting for you at 724 Third Ave.

The owner of Coach’s Bar and Grill is Matt Livingston, who is also the owner of Railroads, a restaurant right across the street. With Livingston also working for the city of West Point, Tyler Damiano was appointed manager a couple of months ago and has been running the restaurant ever since.

“The challenging thing is getting used to the daily operation and learning the logistics of the business,” said Damiano.

When you walk into Coach’s Bar and Grill, you will notice the unique look of unfinished industrial walls. It has the feel and setup of a sports bar.

There is a football jersey hanging up from Springfield High School in Lanett, Ala., (where Livingston coached Damiano in football), a football jersey from Jacksonville State University in Jacksonville, Ala., where Livingston played college football, a Coach’s Wall where pictures of local coaches in West Point stand as soon as you walk to the front desk of the restaurant, Red Raider jerseys from West Point High School, boxing memorabilia from the 1996 Summer Olympics in Atlanta, an old scoreboard on the second level of the grill, classic tennis rackets pinned to the wall, pennants of SEC schools like Auburn, Tennessee, Alabama, Georgia and South Carolina hanging up, football helmets, and past Sports Illustrated magazines posted on the back walls of the grill.

However, Coach’s doesn’t want to be known as just a sports bar but also a family restaurant.

“We don’t want this place to be only considered a bar but a family-oriented restaurant too,” said Damiano.

The favorites on the menu at Coach’s are wings (15 different flavors), multiple appetizers (13 different kinds) and beer (eight different brands of beers on draft). Other popular choices are half-pound burgers, shrimp baskets, rolls and dill pickles (called a “Hockey Puck”).

For the children, Coach’s has five different kids’ meals and they include meals for vegetarians as well.

If you want to come by, relax and check out some sports then there will be plenty of televisions to watch from. There are 15 total TV’s set up in the bar — 11 15-inch TVs, two 65-inch TVs and two 32-inch TVs.

“I’ve worked in warehouses and factories but my favorite thing to do is work with people,” said Damiano. “I like to work with and talk with different people. I like to get their inputs. When someone says to you they enjoy what you’ve made or that you’re doing a good job, then there’s no better feeling then that.”

With Coach’s being opened for a month, they have still been able to include special nights like Monday night trivia from 7 p.m. to 9 p.m. and a Wednesday night special where customers can order all you can eat boneless wings and fries for only $8.99.

“When people want something to do or want a place to go watch a game, we want them to automatically think about Coach’s Bar and Grill,” said Damiano. “I want every experience for them to be an unforgettable one, a comfortable one and I want them to feel relaxed when they walk through the door and welcomed every time they come and go.”