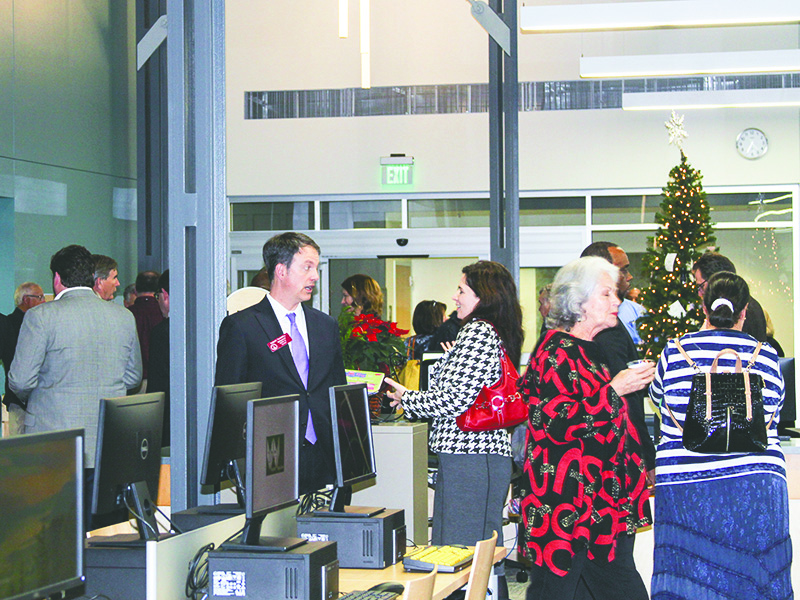 Community members and local representatives gathered on Tuesday to view the new Hogansville Library on Johnson Street next to the Pilot Club Park. (Photo by Alicia B. Hill | LaGrange Daily News)

HOGANSVILLE – Parking wound around the block on Tuesday as the community gathered together to get a glimpse of the new structure in the city that is sure to become a local meeting point in the near future.

Hogansville unveiled its new, modern library on Tuesday to the community and local officials. The library was built to replace the building on Main Street that had become too small to meet the community’s needs.

“(This is) our brand new library,” said Troup-Harris Regional Library Director Keith Schuermann. “(It has) 11,200 square feet, which is nearly a 400 percent increase in square footage over the old library, so we can definitely see an improvement there.”

The new library was built using $1.12 million in special-purpose, local-option sales tax funds and $2 million from the state, and both Schuermann and local officials emphasized that it would not have been possible without the support of the community.

“I have served to help promote the SPLOST campaigns in our community, and those of us who are community leaders know that that is so important to our community for them to be able to decide what they would like to have in their communities and give their citizens the right to vote and choose what they’d like to have,” said County Commission Chairman Patrick Crews. “For those community leaders, thank you for making sure that this happened in Hogansville. Thank you to the citizens who voted to make sure that it was a reality, and congratulations to Hogansville.”

The library is equipped with modern amenities like self-checkout, a 3D printer and computer stations. Projectors are also planned for the building, but they could not be installed in time for the grand opening.  The building also features a modern layout that gives the building an airy feeling without creating acoustics that would encourage noise, its designers said.

“I think we really wanted it to feel like the inside, outside flowed, so that it actually felt like the library was larger than it was. The way it’s sighted is to really be able to experience the landscaping from the inside,” said architect Meghan Teague of McMillan, Pazdan, Smith Architecture, of Greenville, S.C. “To really feel like you’ve got this house with a front porch… I think also we wanted just a really inviting environment with high ceilings that’s welcoming to all age groups here in Hogansville.”

The new library is located on Johnson Street next to the Pilot Club Park.

The Troup County Commission and the city of Hogansville are working together to decide on the best use of the former Hogansville library building, but there is no plan for the building currently.  The city had considered using the building for a new City Hall, but it was ruled too small for that use. The Hogansville City Council does plan to hold future meetings in the new library after a few more amenities like projectors are installed, but the next city meeting is still planned to take place at City Hall on Monday at 7 p.m.